For the past nine years, Villanova’s English Department faculty have offered summer reading recommendations to the campus community. The department has kindly allowed Falvey to reprint the list on the Library’s blog and share it with our patrons. Check out this summer’s features below and explore prior recommendations here.

Time is a Mother by Ocean Vuong.

For me, summer is a time to slow down, and Ocean Vuong’s recent collection of poetry demands all the time we can give it. Hauntingly beautiful, these poems weave together worlds of feeling in just a few pages. In one, entitled “Amazon History of a Former Nail Salon Worker,” Vuong collects lists of objects, leaving us as readers to fill in the gaps. I’ll be thinking about that record of orders every time I receive a package. 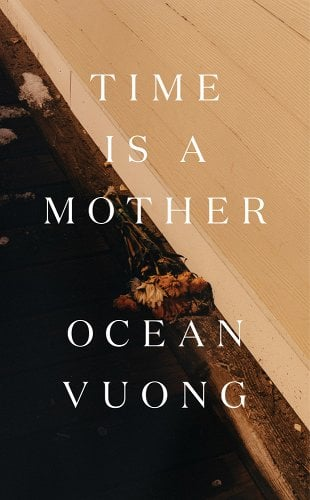 Two books are at the top of my summer reading recommendations, one that I just finished and one that I just started. The first, Read Until You Understand: The Profound Wisdom of Black Life and Literature (WW Norton, 2021), is a beautiful blend of memoir and cultural criticism. Written by Columbia University comparative literature professor, Farah Jasmine Griffin, the book begins with her memories of her father’s last hours on earth, suffering at the hands of insensitive and misinformed Philadelphia police officers. It then moves readers through a series of important American texts—literary, musical, and visual—to consider the ways Black people have always participated in and contributed to the American democratic project, even when they have been denied its basic freedoms and liberties. Dedicated to TM, the book pays tribute to the late Toni Morrison in each of its ten chapters and offers insight into the work of a wide range of Black artists and thinkers. The book’s title, taken from a note her father left her in one of his many and precious books, invites readers on a journey through the quest for Black freedom, justice, rage, resistance, and death, upwards to love, joy, beauty, and grace. Griffin’s beautiful writing made me cry, laugh, and hope. 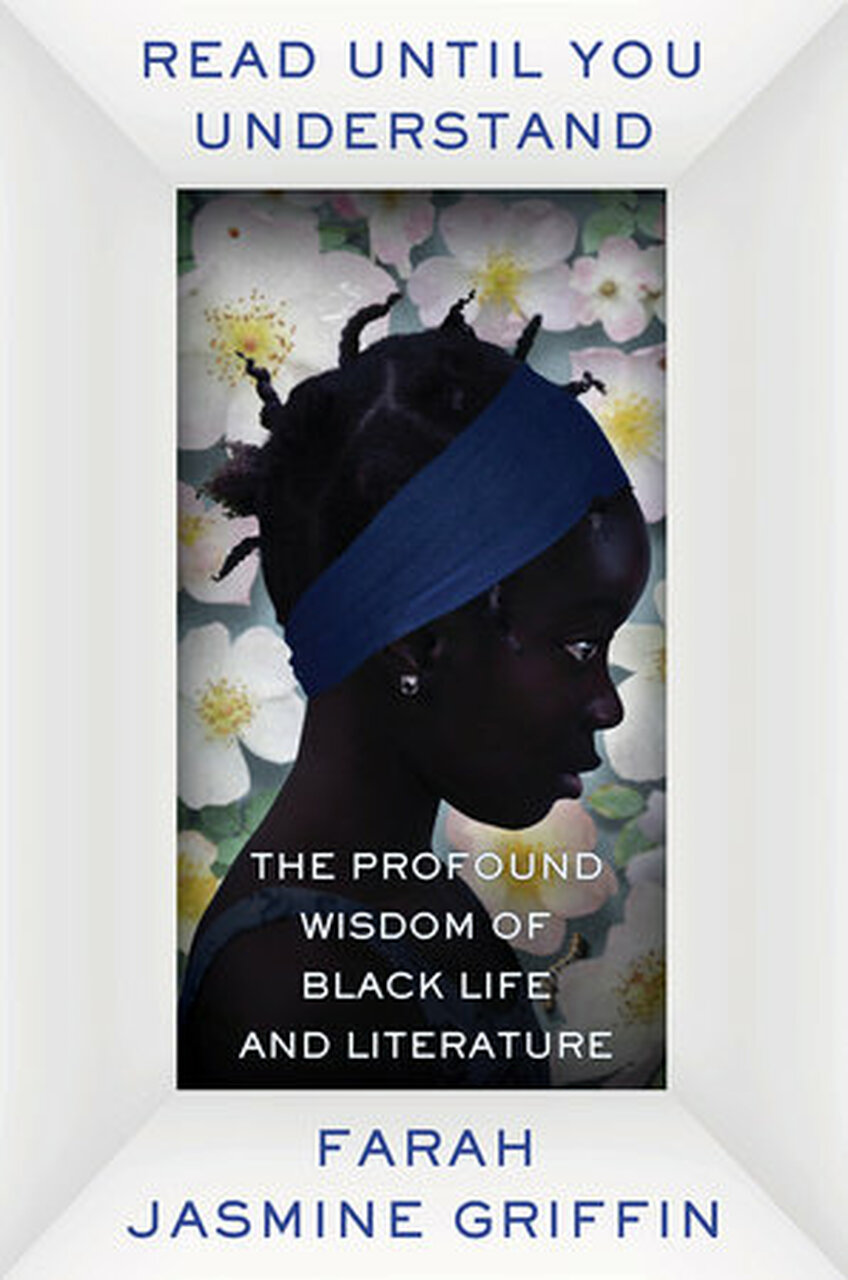 The second book, Moon and the Mars (Penguin Random House, 2021), is a novel by Kia Corthron. Set in New York’s impoverished Five Points District in the 1850s through the 1860s, the novel is told from the perspective of a young Black and Irish girl named Theo. She is beloved by both sides of her family and lives between the homes of her Black and Irish grandmothers. “Throughout her formative years, Theo witnesses everything from the creation of tap dance to P.T. Barnum’s sensationalist museum to the draft riots that tear NYC asunder, amidst the daily maelstrom of Five Points work, hardship, and camaraderie. Meanwhile, white America’s attitudes towards people of color and slavery are shifting—painfully, transformation ally—as the nation divides and marches to war.” The audiobook is a wonderful companion to the written text and is masterfully read by narrator and actor, Robin Miles. Both the reading and listening experiences are a treat! 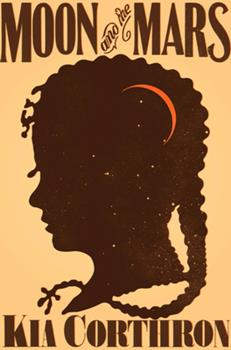 In his New York Times Book Review rave of Mercy Street, the novelist Richard Russo says he was “gobsmacked” by the time he finished reading. Haigh’s last novel, Heat and Light took on fracking, and managed to produce a nuanced portrait of rural Pennsylvanians caught in the grip of big corporate exploitation. Here she wades into one of the most fraught issues in American politics, particularly in our current moment: Abortion. If you’ve ever read Haigh before, you know this novel will be intellectually insightful, emotionally compelling, and will have a lasting impact long after you’ve read the last page. 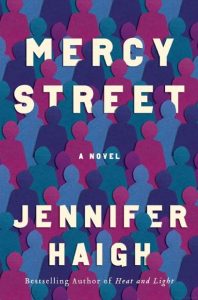 I’ve been reading modern-day creative responses to Homer, most recently David Malouf’s Ransom (which turns Priam’s journey to the Greek camp at the end of the Iliad into a novel) and Madeline Miller’s Circe (which develops the Circe episode from the Odyssey into a full account of her life from her own perspective). So one of my books this summer will be Miller’s The Song of Achilles. As she does in Circe, Miller draws on other ancient stories of her characters, and in this novel she expands the story of Achilles and Patroclus, telling it from Patroclus’s point of view and as a love story. In 2012 it won the Orange Prize for Fiction (now called the Women’s Prize for Fiction). 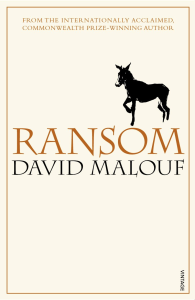 I listened to the audiobook when it first came out, fell in love with it, and plan to reread it in print this summer. It’s a novel bursting in feelings, a coming-of-age story about a working class gay Scot, and a beautiful representation of the relationship between a boy and his alcoholic mother. If that’s not persuasive enough, it also won last year’s Booker. 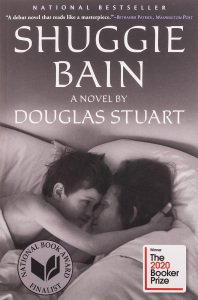 I highly recommend Louise Erdrich’s The Sentence. Part ghost story, part narrative of Minneapolis in the midst of the summer of 2020, this novel celebrates independent bookstores and communities forged through reading (there’s even a reading list at the end) as it thinks about prison sentences, Indigenous remains, policing, memory, and history. Much of the action takes place at Erdrich’s bookstore, Birchbark Books, which is haunted by an annoying customer who just won’t leave. I never thought I’d like a novel that represents the outbreak of COVID-19, but I couldn’t put this one down and am still thinking about it. 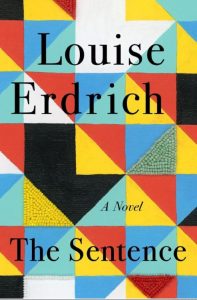 In April, a virtual event was held to celebrate the release of the 2022 edition of CONCEPT,  the scholarly journal of graduate students in the Villanova University College of Liberal Arts and Sciences (CLAS). This year’s edition of CONCEPT marks the 45th volume in the series.

Hosted by Emory Woodard, PhD, Dean, Graduate Studies in CLAS, the virtual recognition ceremony served as an opportunity to learn more about the multi-faceted process of getting CONCEPT prepared for publication. From enlisting faculty and graduate students to serve as editors and peer reviewers, carefully evaluating the many student submissions, and painstakingly editing student work—there are many steps involved in this great undertaking. At the event, students and faculty discussed their experiences working on production of the journal. You can view the event here.

CONCEPT accepts papers from graduate students in the arts and sciences and seeks to feature exceptional interdisciplinary work. It is published in partnership with the Office of Graduate Studies in CLAS and Falvey Library.

We would like to especially highlight the work of two outstanding graduate student employees at Falvey Library: Emily Poteat and Ethan Shea. Poteat, a history major, is a graduate assistant for Distinctive Collections and Digital Engagement and Villanova’s Irish Studies Program. Her paper is titled, “Operation Barbarossa and Hitler’s War on the Eastern Front.” Shea, an English major, is a graduate assistant for the Communication and Marketing department. His piece is titled “The Unracing of Whiteness in Heart of Darkness.”

We are also proud to recognize the efforts of Library staff member Dave Uspal for his technical support of the journal. He is a member of the Technology Services department at Falvey Library.

Falvey would like to congratulate the many faculty, staff, and students that made CONCEPT 2022 possible! 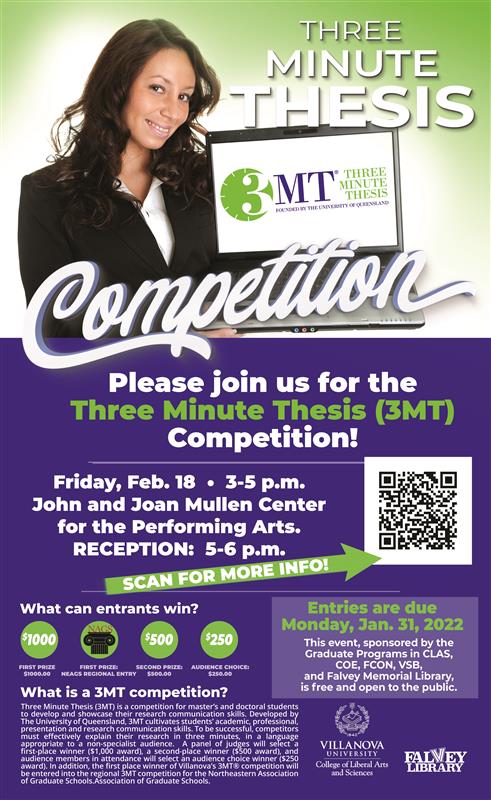 What is a 3MT competition? Three Minute Thesis (3MT) is a competition for master’s and doctoral students to develop and showcase their research communication skills. Developed by The University of Queensland, 3MT cultivates students’ academic, professional, presentation and research communication skills. To be successful, competitors must effectively explain their research in three minutes, in a language appropriate to a non-specialist audience.

This event, sponsored by the Graduate Programs in CLAS, COE, FCON, VSB, and Falvey Memorial Library, is free and open to the public. For more information about 3MT, please visit the 3MT website.

Grab your tickets to the competition here (there is no cost to attend the event). 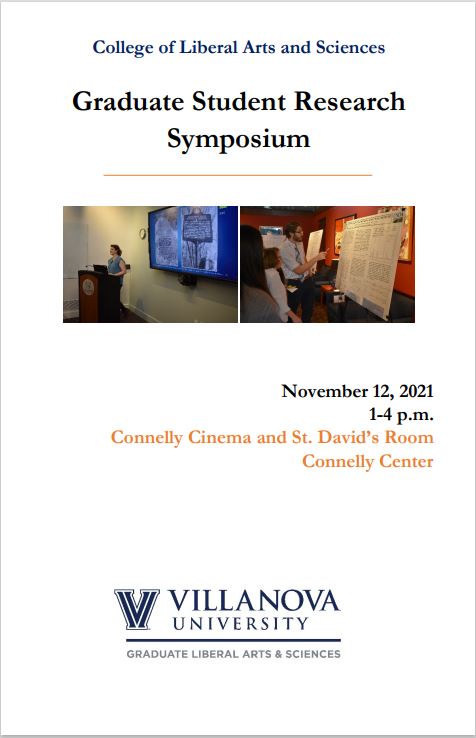 Students will present their research with a poster or a Three Minute Thesis-style oral presentation. For a full list of presenters, check out the symposium program.

Be sure to stop by and see the innovative research being conducted by graduate students in CLAS. 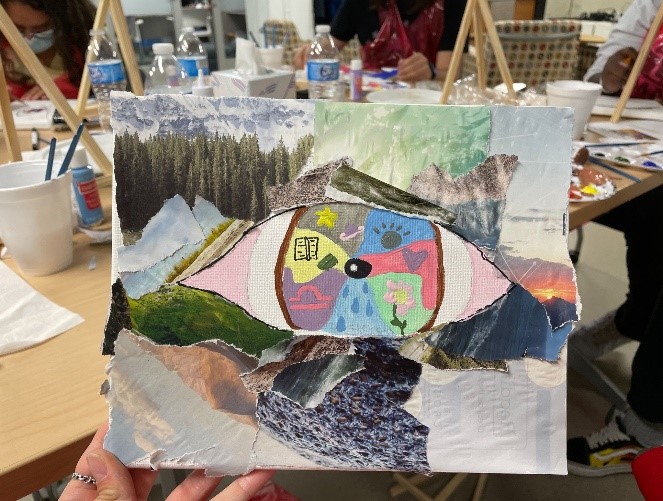 This year marked the inaugural Inclusion Week at Villanova University. The series, which ran from Sept. 27-Oct. 1, was sponsored by the Student Government Association (SGA) and the Office of Diversity, Equity and Inclusion (ODEI) in partnership with many groups on campus. In honor of the series, the Center for Access, Success and Achievement (CASA)  and the College of Liberal Arts and Sciences (CLAS) invited students to an “Art and Identity” painting event on Thursday, Sept. 30 in the Idea Lab (ground floor of Falvey Memorial Library). This painting event was one of the final events of the week, which celebrated the various intersecting identities on campus.

Students learned about how identity closely impacts art and how we may not be conscious of the ways that art is all around us. Public art on campus includes The Awakening, also known as the “Oreo,” as well as St. Augustine’s Students in front of the St. Augustine Center. Students learned and discussed the differences between these two art pieces on campus in terms of interaction with the pieces and their significance to our community.

During this Courageous Conversation workshop, students were able to create their own art projects linked to their unique identities. First, students took a close-up selfie of one eye, and then they sat down to sketch their own eye on a canvas. Next, students picked various symbols or drawings to represent their experiences and identities. Some students chose the Spotify logo, and some chose flags of countries from which they originate. Some students represented their major through a beaker full of chemicals.

Each student interpreted the project in a different way! No two eyes looked alike.

This was a great way to cap off Villanova’s Inclusion Week and to celebrate the various individual intersecting identities at Villanova.

You can see these art pieces displayed on the first floor of the library from October to November. Take a closer look to see if your own identity resonates with any of the pieces displayed!

Anna Jankowski CLAS ’23 is a Junior Communication Major from the Baltimore area who ​​works as a Communication & Marketing Assistant in Falvey Memorial Library. 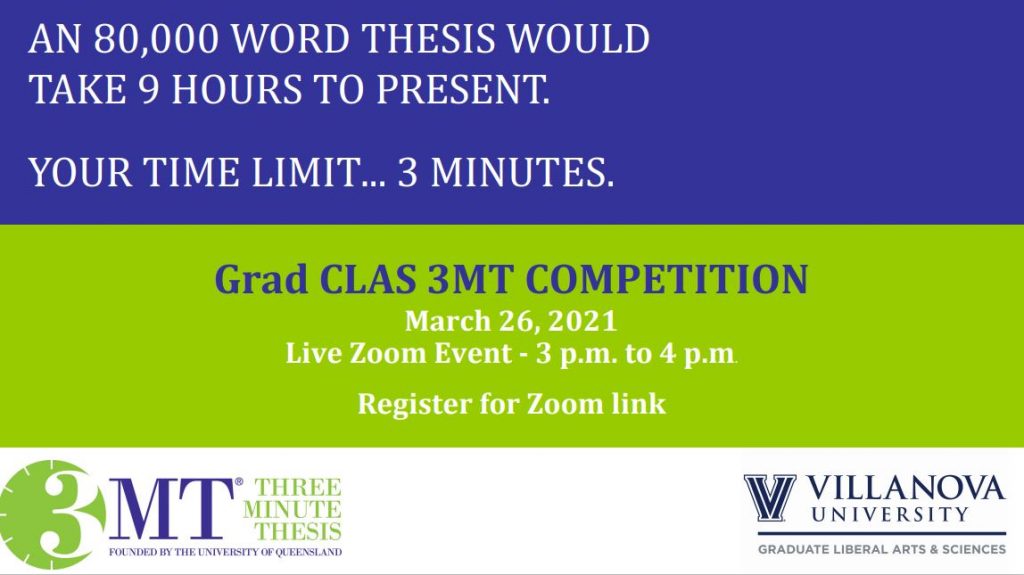 Villanova will be hosting its virtual 3MT competition on Friday, March 26, from 3-4 p.m. Three Minute Thesis (3MT) is a competition for graduate students to develop and showcase their research communication skills. Competitors must effectively explain their research in three minutes, in a language appropriate to a non-specialist audience. A panel of judges will select a first-place winner ($1,000 award), a second-place winner ($500 award), and audience members in attendance will select an audience choice winner ($250 award). The first-place winner will represent Villanova in a regional 3MT competition.

Once registered, you will be sent a link to the event. This ACS approved event, sponsored by the Office of Graduate Studies (CLAS) and Falvey Memorial Library, is free and open to the public. The Three Minute Thesis was founded by The University of Queensland.