Open Mic Draws Poets and Listeners to the Library

“My mother never forgave my father
for killing himself,
especially at such an awkward time…” 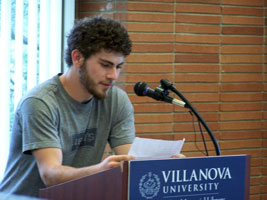 Lisa Sewell, PhD, an associate professor in the English Department and also the director of programming, Gender & Women’s Studies, began the poetry reading with “The Portrait” and also “The Long Boat” by Kunitz.

Dr. Sewell introduced senior class member Kathleen Pierce. Kathleen presented the just-released 2012 issue of Arthology, one of University’s student literary-art journals. Editor-in-chief of and a contributor to Arthology, she made copies of the journal available to attendees.

Kathleen also shared her poem, “Commuter’s Daydream.” Ahren Potratz came to the microphone next to read “In a Wheatfield in Auvers-sur-Oise.” And Ciara Sprance presented “Naturalism.” Arthology features all three of these poems.

Next, Gerald Dierkes, a Library staff member, recited his poem “Apostrophe.” Paul Trahey offered “Ode to Cold Spaghetti” and “The Altar.” Then Irish Studies Director Joseph Lennon, PhD, delivered three of his own poems about learning to play the harmonica, before reading two poems by Paul Durcan: “The Kilfenora Teaboy” and “The Lion Tamer.”

Ravahn Duval presented “One Day,” which appears in Arthology. Melanie Romero shared “The Pietà.” Melanie’s selection as Senior Class Poet was announced at the English Department awards ceremony on May 4.

Dr. Sewell concluded the event with her own poem, “Murder on the Orient Express.” The Open Mic Poetry Reading showcased the students’ imaginative creativity and skill.  And Dr. Sewell’s obvious passion for promoting poetry made this well-attended event a success.