On March 29, 2011, members of the Catholic Research Resources Alliance (CRRA), library directors, university librarians, archivists and technologists from across the United States and Canada met in Falvey Memorial Library to hear about several major developments and contributions Villanova University is making to the landscape on which the Catholic Portal of the CRRA has established itself. 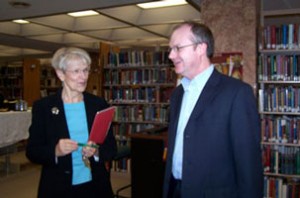 Beginning with a blessing by University Archivist, the Rev. Dennis Gallagher, O.S.A., Ph.D and following welcoming remarks by University Librarian Joseph P. Lucia, M.A., M.L.S., which set the stage, attendees were offered a series of brief talks by Falvey professionals from the special collections and digital library team, which includes members of the Library’s technology development team and scholarly outreach team. The impetus for this session was a one day conference on the intersection of scholarship and technology at Villanova University’s library, VuStuff I, offered in the fall to academic librarians from the Philadelphia region interested in scholarly communication and digital initiatives.

Mr. Lucia answered his own question of  “why are librarians building technology?” with a clarion call to promote an open source, resource sharing approach that favors technical-skill development, which is in keeping with the tradition of the academic library as a resource for aiding scholars in accomplishing and sharing their work. According to Lucia, openness—whether it comes to book stacks, data, or engineering information-sharing solutions—is something for which the academic library community ought to have a missionary zeal.

Special Collections and Digital Library Coordinator Michael P. Foight, M.L.S., presented an overview of Villanova University’s Digital Library, which opened its virtual doors in 2006. The Digital Library serves as a repository of several collections built from the scanning of rare books owned by Falvey to the preservation of digital copies of infrequently held printed materials and unique manuscript collections, borrowed from partners for the purpose of digitization. Special and Digital Collections Curatorial Assistant Laura Bang talked about several interesting projects, such as photographing and documenting trees on Villanova’s campus and adding them to a digital arboreana collection.

Two of the Library’s own technology staff, Library Software Development Specialist David Lacy and Library Technology Development Specialist Demian Katz, spoke conjointly about VuFind, the open source search and discovery software developed at Falvey, which has gained acceptance in many library systems world-wide. They also discussed VuDL, the open source digital library software also developed at Falvey, which was released nationally in time for the Association of College and Research Libraries’ biennial convention, held in Philadelphia later that same week.

Library outreach team members who also contribute to the life and growth of the University’s Digital Library spoke about digital library partnerships and other collaborative projects. Darren G. Poley, M.A., M.L.S., outreach librarian and scholarly outreach team leader noted some changes that have occurred since the Digital Library Federation was founded in 1995: the advent of the Web and the entirely changed and continually changing horizon for what many libraries have set out to create over the last decade and a half, a trusted digital repository.

Falvey’s approach to separate the institutional bibliography, the community bibliography project begun in 2008 and in constant development, from the open repository of the Digital Library (both using home-grown open source software), was a bold and decisive move in favor of rethinking the myth of a monolithic digital institutional repository. Jennifer Younger, chair, CRRA board of directors, and former Edward H. Arnold Director of Hesburgh Libraries at the University of Notre Dame, commented on Villanova University’s support for the Library’s commitment to “collaboration for the sake of scholarship,” which, as put forth by Poley, has taken on many and various forms. She describes this support as positive and important.

Assistant Outreach Librarian Stephen Spatz discussed Falvey’s initiative to begin hosting e-journals, responding to how online publishing has become another characteristic of academic libraries in the twenty-first century. Web Specialist for Library and Scholarly Applications David K. Uspal, a relatively new member of the Library’s staff, described a “microservice” that Falvey’s outreach team began offering in 2010.  This service makes the intellectual contributions of faculty members more easily discovered on the Web by incorporating vitae citations into the community bibliography. Due to the multi-team involvement environment at Falvey, Uspal mentioned how he is on all three Library teams presenting at the seminar.