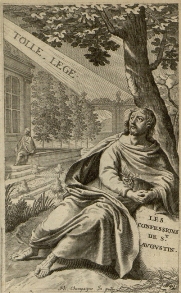 The invention of the printing press made the works of Saint Augustine more widely available to early modern readers, and he became a bestselling author, as evidenced by the numerous editions of his works published during the 16th through 17th centuries.

On display is the first English translation of City of God, published in 1610. Was this edition commissioned to convince investors that English expansion in colonial Virginia was an opportunity to promote Christianity in the New World, as an Augustine scholar suggests?

Also featured is a 1555 critical edition by Erasmus, a reprint of the Complete Works edited by the famous humanist in 1528. Erasmus based his edition on Amerbach’s but included the three works omitted from that 1506 version. “Besides correcting errors in the previous edition, Erasmus added his own observations,” according to the exhibit’s explanatory text in the case “Early Complete Works.”

“The Printed Saint Augustine,” curated by Bente Polites, Special Collections librarian, is on display on Falvey’s second floor. This exhibit evolved from the small display Bente created to celebrate both Augustinian Heritage Month and the marathon reading of Saint Augustine’s Confessions in November, 2010.

This exhibit focuses on early editions, from the 15th through 17th centuries, of Saint Augustine’s works, although one case, “Early English Translations,” features works from the 19th century.

Of interest to art lovers is the open volume, Principalium Sententiarum in Explanationem Libri Psalmorum, printed in Paris, 1529, which has a placard stating the “Border of the title page [is] attributed to Hans Holbein the younger.” Holbein the Younger (1497/98 – 1543) was an important Northern Renaissance painter and draftsman. This book is in case 11, located adjacent to the Special Collections department.

The earliest books, shown in the case “Incunables 1450-1500,” were printed in Naples, 1477; Cologne, 1482; and Basel, 1490. Incunables are works “produced during the infancy of printing, i.e., from the invention of the art of typographic printing in the 1450s to the end of the 15th century.”  The focal point of this case is a large volume, De Civitate Dei Cum Commento (The City of God with Commentary) (Basel, 1490), open to a color illustration showing Saint Augustine as a scribe and below him a city with angels and devils. Incunables, mainly found in monasteries and the libraries of royalty and nobility, did not have wide readership.

The next case, “The Confessions: 16th Century Editions,” displays five volumes printed in various locations: Cologne (1567); Paris (1540) (look at the “printer’s device,” an elephant, perhaps an early example of advertising, on the title page); Dillingen, Germany, (1567) with a fascinating inhabited capital letter in its text; Louvain (1573) (again note the printer’s device); and Würzburg (1581) with its tiny illustration on the title page.

Sixteenth and 17th century editions of The Confessions fill two more cases. They too were printed in various locations such as Cologne, Paris, Rome, Antwerp, Dillingen, Brussels and Lyon.

The case “Early English Translations” features two large volumes Of the City of God, both printed in London. The 1610 translation by John Healey is the first edition of  City of God in English. The other volume in this case, the second English edition, dates from 1620.

As the exhibit’s text notes, the “1610 edition has a rather cryptic preface which states that the translator, J.H., has just left for Virginia. It is a puzzle why J.H. (John Healey) and the publisher, George Eld, had an interest in procuring a translation of De Civitate Dei at this time. Vessey, an Augustine scholar, found it conceivable that Healey and others were engaged on behalf of the London Virginia Company in a campaign to persuade potential investors that English colonial expansion not only was an affair of state and commerce but also of Christian religion. The 1610 English edition of The City of God is found in a listing of books held in a library in the Virginia Colony before 1624.”

A second case of early English translations shows works from the 1600s, 1800s and one from 1900. The 1900 edition has an interesting history. According to the explanatory text, it is from a limited edition of 400 copies: “This volume was part of the 1900 World’s Fair display of book arts.” This particular edition Of the City of God features a cover that is of special interest.

Although it is modern, it appears much older because of the decorative style. The cover was made by a technique called vellucent, invented by Englishman Cedric Chivers (1853-1929). To protect the design on a book’s cover, translucent vellum (calf skin) is placed over the paper on which the design is made. The display volumes’ covers have applied gold and mother of pearl inlays as well as images of Saint Augustine, an angel and a floral interlace, all in color.

Joanne Quinn created the graphics for the exhibit. She based her image of Saint Augustine on one found in a 15th century manuscript in Special Collections.

Laura Bang, Special and Digital Collections curatorial assistant, designed four posters on the topic “Saint Augustine in the Digital Age” which accompany the exhibit. She included QR codes on the posters. A QR (quick response) code, a type of barcode with small square modules on a white background, can be read by some cell phones. In Laura’s posters the QR code provides a URL to various resources in the Digital Library. Be sure to try this on your smartphone.

This exhibit will appeal to viewers on many levels: scholarly (test your Latin), visual and historical. For a full appreciation you may want to visit several times.