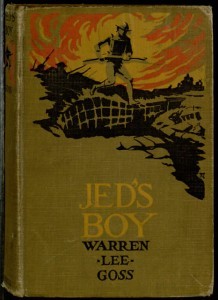 Our latest Distributed Proofreaders project, Jed’s Boy, continues the theme of juvenile novels about the first World War, though this one has a deeper history than most of the others. Its author, Warren Lee Goss, was a Civil War veteran who wrote several books about that conflict, including a juvenile novel called Jed: A Boy’s Adventures in the Army of ’61-’65, published in 1889. When the Great War broke out, Goss wrote a sequel to Jed in which the earlier protagonist’s nephew participates in the newer conflict. The sequel was published thirty years after the original, in 1919, shortly after the end of the war. While the original Jed is not completely forgotten (an audio book version is currently in print), the sequel has been less fortunate. By producing an electronic text for Project Gutenberg, you can help make it accessible once more for anyone interested in Goss’ later work, or contemporary portrayals of World War I.

Distributed Proofreaders makes it possible for volunteers to assist with corrections one page at a time; even a few minutes of effort will help! To learn how it works, just read our Proofreading the Digital Library post. When you’re ready to join in, you can visit the project page to get your first assignment.