Dig Deeper: How Did Labor Day Begin and Evolve?

Just as Memorial Day marks the unofficial beginning of summer, Labor Day marks its end. Now widely celebrated with picnics and trips to the shore or to the shopping mall, much of the holiday’s original meaning has been forgotten as well as, like Memorial Day, the date on which it was originally celebrated.

The first official Labor Day celebration occurred on a Tuesday; Labor Day is now commemorated on the first Monday of September. On that Tuesday, Sept. 5, 1882, the Central Labor Union (CLU), a New York City area local labor union organized in January 1882, held the first Labor Day parade. The parade began inauspiciously: there were numerous spectators, but only a few marchers and no band. These few were soon joined by 200 members of the Jewelers Union and their band. Next to join were a group of bricklayers and their band. Spectators joined the parade as did another 500 union men. By the end, there were at least 10,000 people, both men and women, marching. Some workmen marched in their traditional work clothes; others wore their best dress garments. Many carried signs such as “Strike with the Ballot,” “Eight Hours for a Legal Day’s Work” (the typical work day was much longer), “Less Work and More Pay,” and “Labor Built This Republic, Labor Shall Rule It.” 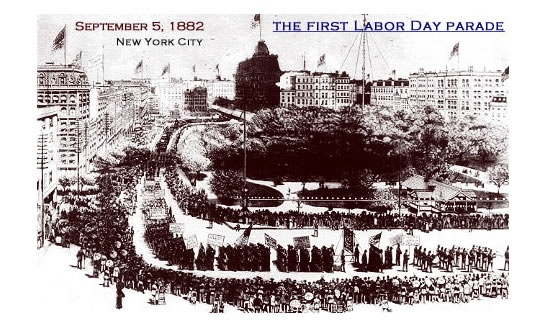 A postcard of the first Labor Day parade

The parade ended at Reservoir Park at noon. From there most of the participants went to Wendels’ Elm Park, New York’s largest park at that time, at 92nd Street and 9th Avenue. There, together with their families, union members who had not marched in the parade and others, they enjoyed a picnic, abundant beer and cigars, and speeches by union leaders. This first Labor Day celebrated American workers and their contributions to the prosperity of the United States with a parade and picnic, setting a pattern for those that followed.

The next year, the Central Labor Union held a second Labor Day celebration; this was even larger than the first one. The following year, 1884, the CLU declared the first Monday of September as the official annual Labor Day. That year over 20,000 workers marched. By 1886 Labor Day was celebrated throughout the United States. The following year five states – Oregon, New York, Colorado, Massachusetts, and New Jersey – made Labor Day a state holiday. In 1894, during Grover Cleveland’s presidency, Senator James Henderson Kyle of South Dakota introduced a bill to make the first Monday of September, Labor Day, a legal holiday; the bill passed on June 28. The CLU originally selected a date in September to create a holiday in the long period between July 4 and Thanksgiving.

The Congressional Record of May 6, 1968 explains that the law was established to benefit families: to provide three-day holidays so that families could get together, to allow more leisure time to participate in hobbies, educational and cultural activities; and to “improve commercial and industrial production by minimizing midweek holiday interruptions of production schedules and reducing employee absenteeism before and after midweek holidays.” Both labor and management supported the bill, but its passage meant that those who worked in retail businesses would not receive the holiday.

Labor Day today is mostly celebrated with travel, picnics, the beginning of football season and retailers’ Labor Day sales. However, some churches hold Labor Day services with Blessings of Tools. The tools may be anything used as part of a trade or business, even pencils and keyboards.  So while we have strayed far from the original purpose of Labor Day, vestiges of its history still remain in some of the day’s observances. How will you celebrate the holiday?

All Around the Year: Holidays and Celebrations in American Life (1994). Jack Santino.