‘Cat in the Stacks: In Defense of Libraries

Colleges should stop building vanity projects like huge libraries and billing students-full libraries are on our smartphones! https://t.co/QBeVKZvIKZ

While Van Susteren’s comments have drawn outrage from the Twitter community, these posts – limited to 140 characters – are also limited to mostly simple gainsay. I would like to take the present piece to focus in on three separate parts of Van Susteren’s comment, and show why her, perhaps ostensibly valid, opinion, in fact, fails on multiple levels.

Let’s focus first on the phrase “vanity projects like huge libraries.” (David Dayen called particular libraries “vanity projects” as well in his piece on presidential libraries from a little over a year ago.) Among the various innovative laboratories and state-of-the-art athletic training facilities – which also are not for the sole purpose of vanity – that colleges can boast to potential applicants, the campus library is not always priority one. Van Susteren may expect, alternatively, that campus administrators continuously revisit the library in order to gaze at their own ability to reshape campus in service of knowledge, but, as a worker in a library, I can tell you that’s false.

Administrators come to the library for one primary reason: to share their knowledge. Take a look at last week’s visit of Dr. John R. Johannes to the Falvey Memorial Library. As former Vice President of Academic Affairs, Dr. Johannes probably made many decisions regarding the upkeep of the library; but did he come here to navel-gaze at the impact of his tenure? No. Dr. Johannes came to help students think about the consequences of this year’s congressional elections. Events like these take place on college campuses throughout the country, and they show us the function of the modern library: to provide a space for the bodily co-presence that inspires the further pursuit of knowledge. 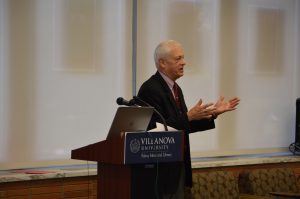 Second, let’s take a look at the “billing students” fallacy. Two weeks ago, we celebrated the opening of the Dugan Polk Family Reading Room. Such events require certain graduate assistants (i.e., me) to read terribly exciting chapters on the donor-ship cycle sent by particular supervisors (i.e., my supervisor) because these donors fit large parts of the bill for libraries to exist. Van Susteren might retort that the spaces are “vanity projects” for these donors, but if she measured how often the Dugan Polk Family uses the reading room against how often the students of Villanova University use the reading room, she would discover that their donation is literally and empirically selfless.

After receiving negative feedback about her library comment, Van Susteren went on a Twitter rant about how she’s not against libraries, just against big, new, expensive buildings. Let’s take a look at athletic facilities – seemingly the opposite of libraries, but really just the other side of the same coin – and see if they bill students for their improvements. In early October, Villanova announced that the renovated Pavilion would be named after William B. Finneran, a large donor to the project. There’s a reason we don’t have the “Villanova Student Debt-Financed Reading Room” or the “Debt You’ll Never Pay Back Pavilion.” It’s because of the generosity of alumni in continuously working to improve universities across the country. 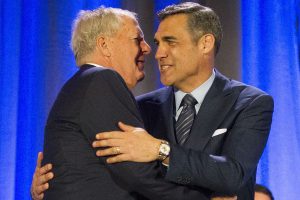 So now that we know libraries are not vanity projects and that new, “flashy” buildings aren’t billed to students, let’s talk about the most laughable part of Van Susteren’s comment: “full libraries are on our smartphones!” First off, no they aren’t. Copyright laws to protect writers and publishers are obeyed by libraries so closely that digital copies are not even allowed to be saved of certain texts. Those of you who attended Peggy Hoon’s talk on copyright laws know this all too well. Some texts remain available as only print copies and must be shared by library systems in order to ensure all students have access to the resource – which requires a lot of manpower and womanpower, and, you guessed it, large buildings.

Second, as mentioned above, the modern library is not all about just lending resources and sending students on their way. The modern library welcomes students to use the spaces and technologies available within the building to further their education. Student groups (e.g. electronic enthusiasts, Harry Potter fans, and resident entrepreneurs) use the library as a tertiary space away from Student Union buildings and dorm halls to congregate for inspiration. Internet chat-rooms and online hangouts simply do not provide the same nourishment for intellectual exploration. The inspiration that students derive from libraries cannot be matched elsewhere on campus (except for perhaps the classroom) and certainly will not be found online. 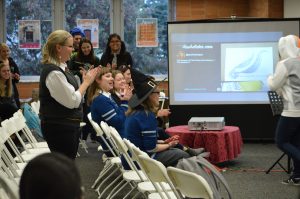 While I sincerely wish that these things did not have to be said in order to contradict the opinion of another person (especially such a successful, accomplished and intelligent person), I do think the role of the modern library requires attention. The words of famous people heavily influence the opinion of the masses, and I hope that Van Susteren’s comments will not influence your idea of our mission. The staff at the Falvey Memorial Library, and indeed those employed at campus libraries across the country, remain committed to providing not only texts and digital media but also welcoming spaces and relevant events for your development as students, professionals, and scholars.