You walk into your first day of class for the semester, sit down with your Holy Grounds cup of joe, and curiously await the arrival of your professor. An energetic gentleman walks in with an enthusiastic smile and tells you that you’ll be graded on a debate later this semester, claiming that it will be fun to become an expert. If he also says that you will be guided through the material by a professor cum coach and makes it clear that the responsibility for learning is yours, then, chances are, you’ve walked into Professor John R. Johannes’ survey course on American Politics.

This pedagogical ethos makes him the perfect candidate to give the premiere talk (at 1pm on Wednesday, Oct. 26) of the Falvey Memorial Library’s US Presidential Election Lecture Series. You may be thinking that you’ve heard all there is to know about the stakes of the current election. You may be thinking, “Yeah, yeah, I get it. I have to get out and vote.” Not so fast, according to Johannes’ recent book Thinking About Political Reform: How to Fix, or not Fix, American Government Politics, there are two sides to the eligible voter participation debate. 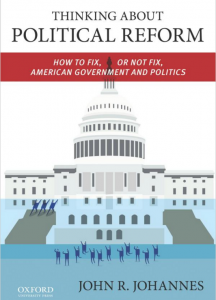 The cover of Johannes’
“Thinking about Political Reform.”

Johannes writes in his book that “members of a democratic society who work, pay taxes, serve in the military, help their neighbors, and so on have, as fundamental to the notion of a political community, both a right and responsibility to vote… on the other hand, many citizens recoil from compulsion, doubt the efficacy of incentives, and worry about abuse.” Passages like these in Thinking About Political Reform demonstrate Johannes’ acumen for seeing and articulating both sides of a political debate.

In 1995, Johannes joined us here at Villanova as our Vice President for Academic Affairs. Since then he has also taught classes in the Political Science Department. He served as a member in the Philadelphia Economy League Task Force on the Knowledge Industry from 2000-2002. Then he worked with and served as chair for the Middle States Commission on Higher Education, where he still serves as commissioner. 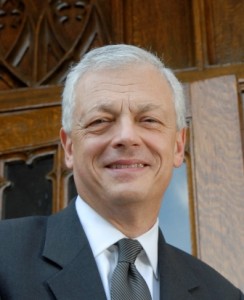 Dr. Johannes poses for a photo.

A blog post like the present piece hardly leaves room to mention his time spent as an editorial board member for the American Journal of Political Science and the Legislative Studies Quarterly, his experience with several political science associations, or his summers spent as a visiting professor at Harvard. A full list of Johannes’ achievements, accomplishments and honors can be found on his webpage.

The point of telling you all of this is to show the qualifications of a man who has dedicated his life to teaching political science and has dedicated a large portion of his career to improving the Villanova University community. On Wednesday, Oct. 26 at 1 pm, Johannes will continue his dedication by giving us Wildcats the chance to learn a thing or two about the direction of our country, focusing specifically on Congressional elections. We’ll see you at 1 pm in Speakers’ Corner.