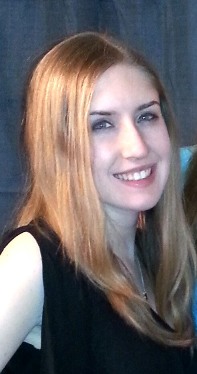 To honor the University’s Class of 2014 Creative Writing Awards, the Library is publishing contestants’ poems or prose excerpts on Falvey’s blog. The Library also has created posters for the contestants’ entries, which will be displayed throughout the library’s first floor.

Between shadowy streets
Morning amber light creeps through
The buildings she darts around, as she drags Mia
By the hand to the barred nursery door,
Where she tells her, Don’t you dare
Leave, hermana, I’ll be back around.

Three blocks away to get to her own school
Of the arts and sciences where the “gifted” go
Become those happy people on the peeling, faded
Posters line the hall as she rushes past and sneaks into class
Into the back broken desk before the piercing bell
Rings over her winded breath and gives her a chance
To catch up with her friends who gossip about Mrs. Garcia.

Disappeared this month, along with Mr. Reed, their counselor
Comes only once a week now, just to make sure no one else has gone
Insane from all of the mierda the city has put them through.
All of those special tests to receive District approval, but how do they approve
The lack of toilet paper in the stalls, the bloody hate words on the cracked mirrored
Walls are crumbling yet this school must running with or without her.

Life becomes a series of let downs which she’s only rushing towards,
To keep from falling behind, suffocated by
The taut red tape of a sinking system,
Lost between shadowy streets.

Megan Plevy, a Class of 2014 Creative Writing Awards contestant, says “Having interned with an educational reform non-profit this past fall, I personally saw the deficiencies in Philadelphia schools and met with students that deal with school budget cuts and the consequential issues every day. In “Rushing,” I try to convey their enormous struggle for a fully funded, stable education and their chaotic lives as a result through the diction and structure of the poem.”

Megan Plevy is an English major with a writing and rhetoric concentration and education minor from northern New Jersey. Besides writing, she enjoys skiing on the Villanova Ski & Snowboard Team, eating copious amounts of frozen yogurt and traveling.