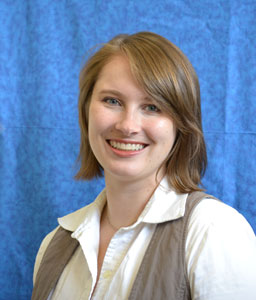 Sarah Wingo joined Falvey’s staff on August 12 as the literature and theatre liaison librarian and coordinator of the Humanities II Academic Integration team, positions previously held by Judith (Judy) Olsen before her retirement in February.

Originally from Ferndale, Michigan, Wingo is a 2013 graduate of the University of Michigan School of Information where she earned her Master of Science in Information (MSI) degree. While at the University of Michigan she concentrated on digital preservation, archives and academic libraries. She also has a Master of Arts degree from the Shakespeare Institute at the University of Birmingham, Stratford-upon-Avon, United Kingdom, where she specialized in Shakespearian studies. Wingo earned her bachelor’s degree in theatre and communication studies from Albion College, Albion, Michigan.

While in graduate school, Wingo worked in various libraries on the University of Michigan campus, but her position at Falvey is her first professional library job.

She has numerous interests: theatre, playing soccer, hiking and other outdoor activities. Wingo says, “I’m also a pretty big media and pop culture junkie. … I really enjoy TV and movies as much as novels and the theatre. Some of my favorite shows right now are ‘Mad Men,’ ‘Breaking Bad,’ ‘The Venture Brothers,’ ‘Doctor Who’ and the web series, ‘The Guild.’”

“I feel very lucky to have found a position that allows me to work with both the English and the Theatre Departments, combining both my areas of academic interest and expertise,” Wingo says.

Alice Bampton is an digital image specialist and senior writer on the Communication and Service Promotion team.