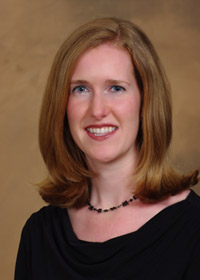 On Oct. 1, Catherine Wilson, Ph.D., discussed “Competing for the Latino Vote” in light of the current U.S. presidential election. Her presentation was the second of four in the 2008 U.S. Presidential Election series sponsored by Falvey Memorial Library. The event also kicked off Hispanic Cultural Heritage Month at Villanova University.

In her talk, she focused on the need to understand the political behavior of Latinos and their involvement in the elections. As the largest minority in the United States, Latinos are fast becoming a key voting population to which current and future presidential candidates will need to be more attentive. Drawing from her recently published book, The Politics of Latino Faith: Religion, Identity and Urban Community, Dr. Wilson discussed the importance of Latinos’ political involvement in the United States.

Dr. Wilson teaches undergraduate and graduate courses in American government, immigration politics, effective nonprofit management, and religion and politics. Her research interests pertain to issues of religion and politics, Latino politics, immigration politics, and nonprofits and social service delivery. Dr. Wilson is an assistant professor in the department of political science and the Center for Liberal Education. She is also the nonprofit course coordinator of the Master of Public Administration program.