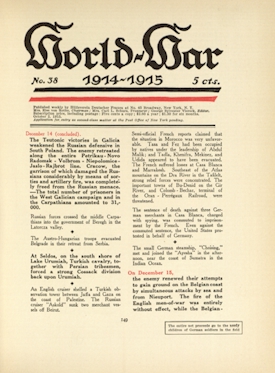 Joseph McGarrity, the Irish-American revolutionary who lived in Philadelphia area during the era of the First World War was an active collector of books and periodicals about Ireland. Within this collection, now housed in Falvey Memorial Library’s Special Collections, are a number of rare pro-German books and newspapers. These were largely published in Philadelphia and New York and chronicle the viewpoints of Imperial Germany and German-Americans in the United States, as war raged in the trenches of Europe and the sealanes of the Atlantic. At the same time as Germany warred against Great Britain, McGarrity and many members of the Irish-American community were actively raising funds to foment Irish independence from Great Britain. In 1916 these effort would help start the Easter Rising in Dublin. McGarrity’s collecting of German materials can thus be seen as an actualization of the proverb: “the enemy of my enemy is my friend.” 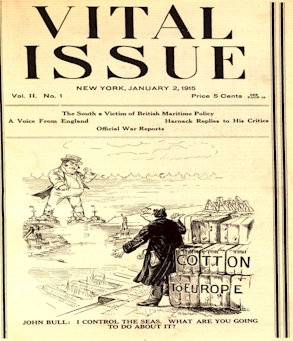 Villanova’s Digital Library has completed the digitization of these newspapers collected almost a hundred years ago by McGarrity, and which consist of nearly complete runs of 3 titles: The Fatherland; Vital Issue; and World War. These titles are rich in articles ranging from hortatory arguments about continued American neutrality and perceived war crimes of the British to narrations of current events from an “unbiased” source, like the armament carried by the Lusitania. These titles also contain elaborate photographic spreads and polemical illustrations as well as pro-German advertisements including specific ads for German war bonds, war trophies, and aid packages (The Fatherland Needs Coffee); even games and apparel (Iron Cross Stick-Pins) were included. On noteworthy advertisement from 1916 for the “Deutschland Game”, claimed that this “game will interest grown-ups as well as the children. Two German submarines try to reach the United States and return to Germany in safety.” Indeed some of the ads are not so much pro-German as pro-Irish with titles such as The Gaelic American featured. 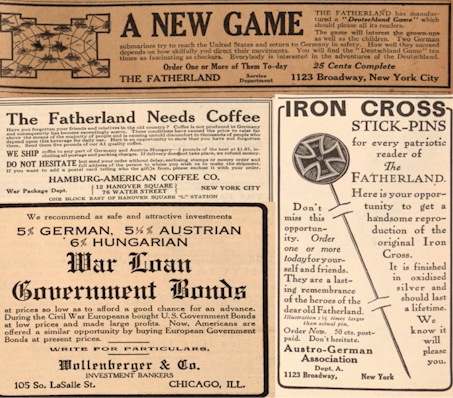 As an effort to publicize these titles Digital Library staff have composed a Wikipedia entry about the most notable of the three titles: The Fatherland; in edited form it is here reprinted :

“The Fatherland was a World War I era weekly periodical published by poet, writer, and noted propagandist George Sylvester Viereck (1884-1962). Viereck reputed to be the child of the Kaiser William I, was born in Munich, Germany, and moved to New York City in 1896, Viereck graduated from the College of the City of New York and directly entered the world of publishing.

Viereck outspokenly supported the German cause at the outset of World War I, and his poetry reflected his pro-German zeal. Drawing on experience gained while working on his father’s German-language monthly, Der deutsche Vorkämpfer (The German Pioneer), later called Rundschau Zweier Welten (Review of Two Worlds), the younger Viereck now channeled his German sympathies into his own publication. He founded The Fatherland in August 1914, a weekly publication in English that reached a circulation of 75,000, by some estimates, and 100,000 by others, to promote American neutrality in the war and give voice to German support. The Fatherland was advertised on the cover of its first issues as a magazine devoted to “Fair Play for Germany and Austria-Hungary.”

Three German-American banker friends helped Viereck with the fifty dollars needed to start up The Fatherland. The first edition of ten thousand copies sold out quickly in New York. The publication grew to thirty employees almost immediately and “took upon itself the task of exposing the malfeasance of the Allied countries, of revealing the prejudices and distortions of the American press, and of rallying German-Americans in their own defense.” The weekly received part of its funding from a German propaganda cabinet set up in New York Society, with which Viereck worked closely.

Viereck was accused by the New York World of receiving German subsidies for propaganda purposes, but the Department of Justice was unable to prosecute. Still, Viereck faced social censure, being driven from his house by a lynch mob and expelled from the Authors League as well as the Poetry Society of America. 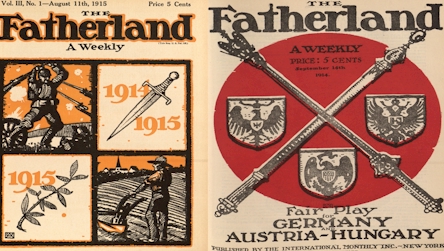