An interesting article from “Inside Higher Ed” on writing a good cover letter for an academic job at a teaching institution.

Community Colleges in the US

How the Job Search Differs at Community Colleges

The application, the interview, and even the offer are not the same

An interesting article from the Chronicle by Rob Jenkins

by Katy Meyers (via Inside Higher Ed)

During my first PhD anthropology theory course, it was suggested to us that we should start writing every single day. Our professor told us that we needed to sit down for an hour every single day, or most days of the week, and just write. We shouldn’t focus on a specific topic, or try to answer a question, but rather we should just write whatever is on our mind. Honestly, I’ve been a fairly good writer since high school, and I wrote a lot in undergrad, so I wasn’t concerned with it. I had to do half a dozen 25 page papers during my masters, and I had just finished writing my thesis. Practicing writing was the least of my worries.

However, writing was a slow process for me. I wrote out detailed outlines, took weeks to fill them in with perfect sentences and dozens of citations. For a final paper I had to begin the process of writing at least a month or two in advance so that I could carefully make my way through it. My thesis only took two months to write, but I spent nearly 8 months planning out every single detail.

Then I started writing my blog. It was literally a way for me to keep up to date with journal articles. I figured that twice a week I would read a journal article that had nothing to do with my own personal interests, but something broadly from archaeology. I would then writeup a summary of the article, add some of my own critiques and publish them online. Honestly, I didn’t even think that people would read it.

My first post was August 2010, and I’ve written almost two posts per week since then, coming to a grand total of 180 posts to date. The posts are about 600 to 800 words long depending on the length of the journal article or my opinion. It used to take me about two hours two write that many words. Now it’s about an hour, and the posts always range on the longer end of the spectrum. I honestly didn’t realize until recently the writing benefits that I had been getting from an activity I consider to be a hobby. I now have the power to sit down at my computer and pound out 800 words with little difficulty.

Since writing is a major part of graduate school, its important that we start developing this skill. That way when we get to the dissertation we’re not paralyzed by the writing. Here are some tips:

1. Write almost every day: My suggestion is not that everyone start writing a blog, but try writing more often. Try sitting down every other day and just writing for an hour or even a half hour. Emails and facebook messages don’t count. Writing isn’t a big deal if you’re doing it all the time.

2. Break it down: Writing a ten page paper isn’t daunting, but writing a 200 page dissertation is. Don’t think about the ultimate goal, think about the proximate ones. Instead of listing ‘finish thesis’ on your to do list, write down each chapter, or even sections within the chapter. If you’re practice writing a thousand words a week, getting out a section won’t seem so scary.

3. Strive for progress, not perfection: The writing doesn’t have to be perfect. We’ve got computers so we can write really rough drafts and edit them later. Don’t worry about getting it right the first time, just get it out! I think of it as doing a ‘mind vomit’. Just get the ideas down on the screen and make them pretty later.

4. Take a break: After you’ve finished your brain dump at the computer, and the words are roughly strewn across your screen, walk away. Take a breather, go for a run, maybe even close the document down for a few days. When you come back to it you’ll be refreshed and ready to make those rough ideas into a document you’ll be happy with.

So just do it. Sit down. And Write, Damnit! I promise it’ll hurt less the more you do it.

Writing is a solitary process. It must be. You’re writing your own ideas. Yes, you are in “conversation” with other scholars, but your writing is your individual contribution to that conversation.

But writing can be very isolating, can’t it? If writing is your primary activity, your days can be pretty lonely. If you are squeezing your writing into a busy day, the solitude can be a relief, but it is still you, writing silently. 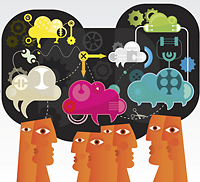 We urge you to speak up! At some time (usually multiple times!) in every writing project, you need to find a person and actually speak.

Why Should You Talk?

You think while you talk. How often do you say to a friend or family member, “Can I talk this over?” or “Would you like to talk about it?” or “I was saying to our friend….” You do think through your ideas using speech.

But the unwritten rules in academia are “Don’t admit that you’re unsure,” or “Don’t let anyone know what you’re thinking.”

It’s time to contradict those messages! We’re all unsure at some point in our writing! There’s no shame in sharing your partially-formed ideas!

When you speak, you have to make sense. You can hear your unclear places much better when you actually use your voice. That’s the reason that writing experts recommend reading your written work out loud: what makes sense to your eye does not necessarily make sense to your ear.

Talking with someone else also reduces the isolation we can experience. As important as solitude is, and as valuable as written exchanges between scholars are, spoken interaction is one of the best tools in your writing kit.

When Should you Talk?

Talking with another person is a big, scary step, but it pays big dividends. Some strategic points in your writing process that call for conversation are:

Who Should You Talk With?

The best person to talk with depends on the stage of your project. For example:

What Should You Talk About?

Framing a conversation about your work maximizes its value for you, and also maximizes your chances to ask again. Here are some phrases to employ:

The Less-Obvious Elements of an Effective Book Proposal

Advice on getting published by Patrick H. Alexander

Getting published usually starts with a book proposal. Many a good manuscript has been turned down because of an ineffective proposal, and many a poor manuscript has been sent out for a formal review because the proposal was flawless. Publication of a scholarly book ultimately depends on the peer-review process, but that step occurs only if the proposal accomplishes its single mission: to get you a hearing. Too often, however, scholars misunderstand the job of the proposal in the overall process. (Continue reading….)

Keeping up with the blog

If you scroll to the bottom of the blog’s homepage, you can click on RSS-Posts and set up an RSS feed to collate the links to new content.

Here are some helpful links to sites that give advice on how to write cover letters, how to prepare your teaching statement, and how to arrange your CV. These links will also be added permanently to the section “Advice.”

How to write a teaching statement (which makes up the vital first part of the teaching dossier)
http://chronicle.com/article/How-to-Write-a-Statement-of/45133/