Happy Friday, Wildcats! Falvey Memorial Library is delivering you another semester of Weekend Recs, a blog dedicated to filling you in on what to read, listen to, and watch over the weekend. Annie, a graduate assistant from the Communication department, scours the internet, peruses the news, and digs through book stacks to find new, relevant, and thought-provoking content that will challenge you and prepare you for the upcoming week.

Yesterday, families across the country celebrated Thanksgiving. For many, the holiday involved traditions like a roast turkey, cranberry sauce, baked mac and cheese, pie, and football. I’ll admit, Thanksgiving is by no means my favorite holiday, but one Thanksgiving tradition has my full support: Thanksgiving specials on television and in film. For this weekend’s recs, I’ve compiled a list of some of the best, or perhaps my favorite, Thanksgiving-themed specials (that aren’t the obligatory A Charlie Brown Thanksgiving) to wrap-up the November holiday season.

If you have 18 minutes and 36 seconds…and want to take part in a Thanksgiving musical tradition, listen to Arlo Guthrie’s song “Alice’s Restaurant Massacree.” Although the song’s length makes it somewhat of a feat, it’s worth one listen around the Thanksgiving season. (Although if my mom had it her way, it would be on a continuous loop on Thanksgiving Thursday).

If you have 21 minutes…and are a Constance Wu admirer, watch Fresh Off the Boat’s first Thanksgiving episode, “Huangsgivng.” It accurately portrays some of the pre-Thanksgiving stress, and Randall Park and Constance Wu are, as always, great. 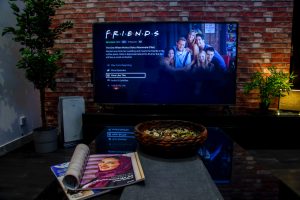 Photo by Mahrous Houses on Unsplash

If you have 22 minutes…and love Friends, watch “The One with the Football.” As a sitcom, Friends has a host of Thanksgiving episodes, but this one shakes it up a bit by focusing on Thanksgiving’s football tradition.

If you have 1 hour and 24 minutes…and want a sprinkle of romance in your Thanksgiving queue, watch Spike Lee’s first feature film, She’s Gotta Have It. It’s an offbeat comedy, quirky in that signature Spike Lee way. (Lee also made a Netflix series version of the film).

If you have 1 hour and 34 minutes…and want to watch a relatively anti-colonialist take on Thanksgiving (at least for the 90s), watch Addams Family Values. The privileged youth summer camp’s Thanksgiving play gets quite the Wednesday Addams reckoning. (Plus, Joan Cusack is an absolute treasure in this movie).

If you have 2 hours and 9 minutes…and want to watch something only tangentially related to Thanksgiving, watch The Blind Side (also available in Falvey’s DVD Collection, if you’re currently on campus). It only has one brief Thanksgiving dinner scene, but it’s brimming with family and football.