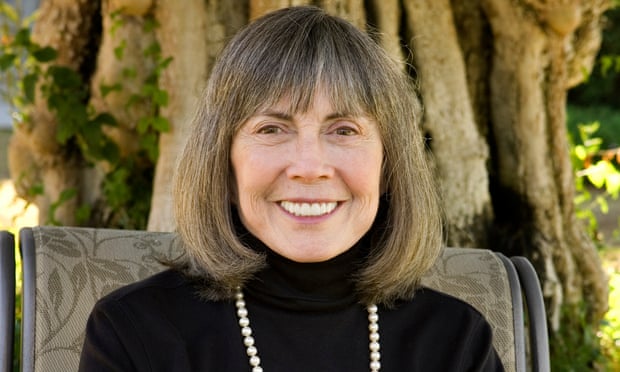 Anne Rice at home in Palm Springs. Photograph: Dan Tuffs for the Guardian.

“Every writer knows fear and discouragement. Just write. The world is crying for new writing. It is crying for fresh and original voices and new characters and new stories. If you won’t write the classics of tomorrow, well, we will not have any.” —Anne Rice

Author of more than 30 novels, Anne Rice was born Howard Allen O’Brien and raised in New Orleans. Changing her name to Anne in the first grade, Rice lived with her parents and three sisters in New Orleans until her mother passed away when she was 15. Her father remarried and moved the family to Richardson, Texas. She attended Texas Woman’s University for a time before marrying Stan Rice, whom she had met in high school. After their marriage in 1961, the couple moved to San Francisco, and attended San Francisco State University where Rice earned a Bachelor’s Degree in Political Science (and later a Master’s Degree in English and Creative Writing in 1972).

In 1966, the couple’s daughter Michele was born. After relocating to Berkeley, Calif., in 1969, Rice wrote the short story Interview With the Vampire. In 1970, Michele was diagnosed with leukemia and passed away in 1972. The following year, Rice worked to make Interview With the Vampire into a novel (published in 1976). Struggling with the loss of her daughter, “she conjured up the vampire Lestat [Interview‘s main character] out of her grief.”

Her son Christopher was born in 1978 and in 1980 she and her husband moved to San Francisco and returned to New Orleans in 1988. In 1994, the film adaptation of Interview With the Vampire was released. Directed by Neil Jordan, the movie starred Brad Pitt and Tom Cruise. Antonio Banderas, Kirsten Dunst, Helen McCrory, Thandiwe Newton, and Christian Slater also starred. Interview With the Vampire was the first of 13 novels in The Vampire Chronicles series that became “one of the most popular and profitable vampire properties of all time; selling upwards of 80 million copies worldwide.”

Rice is the author of numerous standalone novels and books series including The Wolf Gift chronicles, The Mayfair Witches, The Sleeping Beauty series, among others. Her novel, Feast of All Saints became a Showtime mini series in 2001. Rice adored her fans, telling the ABC News program Day One in 1993, “When I go to my signings…Everybody else is dripping with velvet and lace, and bringing me dead roses wrapped in leather handcuffs, and I love it.” Her fans in New Orleans, part of the Vampire Lestat Fan Club, host numerous events including an annual Anne Rice Vampire Ball. A local celebrity in her hometown, Rice was know to show up to local book signings in a coffin. Rice passed away on Saturday, Dec. 11, 2021, in Rancho Mirage, Calif., from complications of a stroke.

Rice was hopeful her legacy would live on—”I want to be loved and never forgotten…I’m really greedy, you know? I want to be immortal.” Rice’s life and legacy remains though her family, her fans and her writing. Acquiring Rice’s major literary works in 2020, AMC Networks plans to adapt Interview With The Vampire in an upcoming TV series on AMC and AMC+ set to premiere in 2022.

Explore some of Rice’s work below:

New Tales of the Vampires:

The Life of Christ:

Songs of the Seraphim: