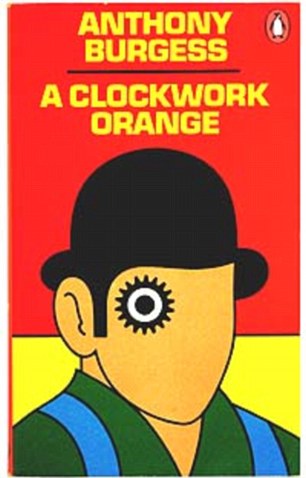 ***Content Warning: Please be advised that this post discusses aspects of A Clockwork Orange, a book and feature film that contain strong elements of sexual assault, torture, and other forms of violence.***

Hello all readers! It is I, Your humble narrator, back with another Flip or Flick, and today I am discussing A Clockwork Orange. Written by Anthony Burgess in 1962, this book is famous for its ingenious and masterful use of language. Spoken in a confusing, mind-twisting slang invented by the main character, Alex, this novel challenges the concept of horrorshow (good) and evil.

In this dystopian universe, a 15 year old boy with a dark and devious mind and a passion for classical music, along with his droogs (friends), wreak havoc on their neighborhood, robbing and assaulting innocent people. After one fatal night and an attack gone wrong, Alex ends up in staja (state jail), staring down a 14 year sentence. A new inmate reformation treatment allows Alex to return to society earlier than expected, however it is not without its dire consequences on his mental stability and outlook on life. Burgess so cleverly makes readers root for the villain and empathize with him, despite knowing full well the destruction and terror Alex causes. This novel challenges the idea of what it means to be “healed” and leaves readers questioning, “What is the cost of salvation?”

The title itself, A Clockwork Orange, does not make much sense at first. However, if one is to look up the translations of Alex’s invented vocabulary, a ‘Clockwork Orange’ is a “mechanically-responsive person”. Through his treatment in prison, Alex becomes a clockwork orange, arguably becoming worse off than he was before. Despite knowing that Alex is a horrid person and a danger to society, one cannot help but feel remorse for him when he is “cured”.

The movie version of A Clockwork Orange, released in 1971, and directed by Stanley Kubrick, brings Anthony Burgess’ masterpiece to life. Viewers can truly witness the dystopian lifestyle of the characters and just how frightening and zammechat (remarkable) this story is. In regard to using the movie as an aid in the overall understanding of the plot, I would say it does a great job in staying true to the storyline of the novel. Because the book can be hard to follow at times, the movie allows for a visual element to enhance and clarify what exactly was happening, despite how graphic it may be. However, from an enjoyment perspective, I enjoyed the novel more. I believe there is a sense of bliss to ignorance and there are certain scenes from this movie that I would rather have left unclear. Just from the first 10 minutes of the movie, I was horrified and quite frightened at what I was witnessing. Despite my opinion, I think cinephiles would better understand and appreciate the context in which the brutality and overwhelming nature of this film is presented.

So, Flip or Flick?

Flip! If you are sensitive to explicit content and prefer to leave some images to the imagination.

Flick! If you want to add a visual component to further enhance the message behind this story. However, it is important you are able to separate the gore from the overall takeaway of A Clockwork Orange and not be bothered by some disturbing content.

Falvey Library owns a DVD copy of A Clockwork Orange as well as several copies and interpretations of the book.  View the full list here.