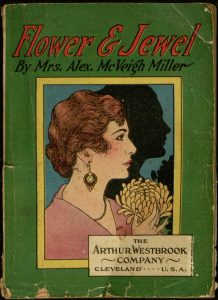 Our latest Project Gutenberg release, produced with the help of the Distributed Proofreaders project, is another romance by the prolific story paper author, Mrs. Alex. McVeigh Miller.

Flower and Jewel packs a great deal into its first chapter, which details not only the birth of twin sisters but also a pair of tragic deaths. The story then jumps ahead seventeen years, to a time when the twins find themselves both falling in love with the same man. This being a Mrs. Miller novel, the sisterly conflict quickly escalates well beyond the bounds of reason. There are dark secrets, bouts of madness, twists of identity, and several attempted murders (including a bombing) before the plot is all wrapped up.

The story also features several African American characters, who are for the most part represented with the typical broad stereotypes of the time. These portrayals do not make for comfortable reading, though they are not entirely negative, and they effectively highlight some of the contradictions, complexities and limitations of the period’s views on race.

This novel was first serialized in the Fireside Companion from January 28, 1888 to April 7, 1888 and later reprinted in book form; now it is also available as a free electronic book that can be read online or downloaded in a variety of popular formats through Project Gutenberg.