eBook available: The Dreadnought Boys Aboard a Destroyer 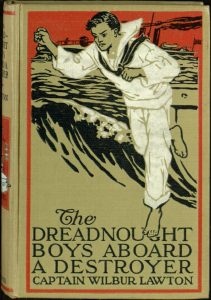 Our latest title to be added to Project Gutenberg thanks to help from Distributed Proofreaders is The Dreadnought Boys Aboard a Destroyer, the second book in a six-volume juvenile series about the adventures of Ned Strong and Herc Taylor, two young men serving in the United States Navy shortly before the first World War. In this volume, Ned and Herc are assigned to the Beale, a destroyer-class vessel traveling to the fictional South American country of Costaveza, where a revolution against the U.S.-friendly government is underway. Although they are meant to remain neutral in the conflict, the boys are inevitably drawn into the conflict, which turns surprisingly deadly for a children’s book.

As with the rest of the series, this book is far from an exercise in subtlety; the good guys are very good and the bad guys are very bad, and some familiar melodramatic plot devices make their appearances along the way. Perhaps unsurprisingly for its time period, the book seems to go out of its way to label and stereotype its South American characters, whether they are heroes or villains. The most distinctive feature of this book is the way it portrays the politics of United States involvement in South American affairs; as with the rest of the book, this is not handled with any nuance, but it shows a mainstream portrayal of a topic that one might not expect to see in the popular culture of the time.

The full text of the book can be found at Project Gutenberg, where it may be read online or downloaded in popular eBook formats.