Last week, Falvey Memorial Library launched the Diversity and Inclusion Resource Guide. In the spirit of that launch, I would like to highlight a resource this week that shows both an example of an early attempt at diversity and inclusion and also how far we’ve come since those early forays – Godey’s Lady’s Book.

Reaching a pre-Civil War circulation of over 150,000, Godey’s Lady’s Book became a locus of American culture by publishing works by such preeminent authors as Harriet Beecher Stowe, Edgar Allen Poe, and Nathaniel Hawthorne. The periodical was published from 1830-1898, and most of its content centered on the empowerment of women. 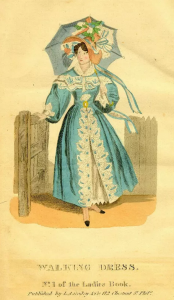 A fashion plate you’ll find on the landing page for this resource.

What fascinates me so much about this important historical document is just how different of a meaning “empowerment of women” had during the 19th century. In one article, you’re as likely to find the phrase “women, who, weak and helpless by nature, have thus become endued with strength” as “as there is a time to be silent, so it does sometimes happen that there is a time when it becomes a duty to speak.”

In another titled “The Importance of Female Education,” you’ll find a rhetorical curiosity when an author advocates for the prioritization of female education because “The father, necessarily engaged in business the greater part of the day, cannot exert the same influence over his children as the mother, who has had the sole care of tutoring their youthful minds and is constantly with them.”

At the moment that these selections seem to promote speaking up and concentrating resources on the education of women, they also confine women to a particular, helpless, and childbearing sphere. This shows a tradition of feminism that goes back almost 200 years in the United States, but it also shows just how far we’ve come – from those perceptions remaining unchallenged to the modern #MeToo Movement and the push for equal pay. 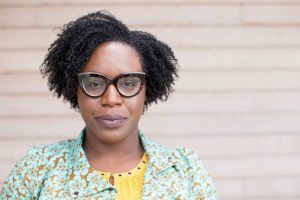 Work for gender equality, more than the continuation of a legacy, remains important in today’s world. Become educated by reading Godey’s Lady’s Book; learn to understand by participating in Women’s History Month, and become an activist by submitting to the Diversity and Inclusion Resource Guide.