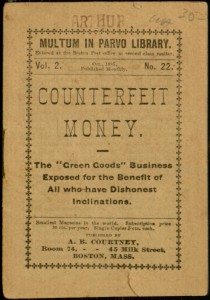 Here’s a familiar scenario: a victim receives an unsolicited message offering easy cash. The temptation overrides their common sense, and they find themselves caught by a clever scheme and robbed of their own money. This sounds like a tale of spammers in the digital age, but our latest eBook release, Counterfeit Money, shows that similar trickery was afoot in the age of the telegraph.

Part of the Multum in Parvo Library, the self-described “smallest periodical in the world,” this new digital edition of a 19th-century chapbook was created with the help of the Distributed Proofreaders volunteers, and can now be read online or downloaded through Project Gutenberg.