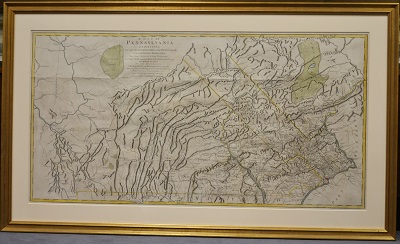 Anyone walking by Falvey’s Special Collections room notices two highly visible objects: in a glass case there is a dark blue coat with bright gold-colored buttons and below is a large gold-framed map. The coat is Civil War General Sherman’s; the map is part of “The John F. Smith, III, and Susan B. Smith Antique Map Collection.” That map, pictured above, is a 1755 Pennsylvania map by William Scull, a fascinating map with features such as the Buffalo Swamp in northwest Pennsylvania, Great Swamp, Great Meadows and much more. How many of these features still exist today? 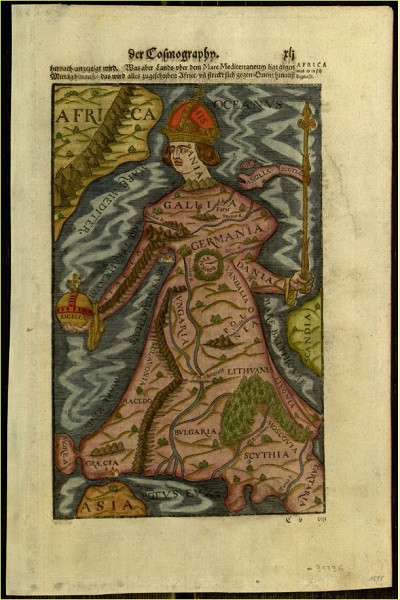 The Digital Library staff has digitized part of the collection, eight maps that are not framed. The framed maps cannot be scanned so are not available online. However, two framed maps are part of the current exhibit in the University Art Gallery in Connelly Center, artworks from donors. This exhibit, commemorating the 175th Anniversary of Villanova University, will be open to September 25, 2017. There will be an exhibit of “The John F. Smith, III, and Susan B. Smith Antique Map Collection” in spring 2018.

John F. Smith, III, recently donated part of his extensive map collection to Villanova and will be making several more donations. Smith says he began collection while he was a back-packer. “I prized the topographic maps that I used to navigate unfamiliar terrain and kept them even when they were old, sweaty and in bad shape. Collecting antique maps came much later. … The first antique map that I bought was an 18th century map of Barbados. I found it in an antique store on the island when my family and I were vacationing there in the 1980s. It struck a nerve, and in succeeding years I began to buy an old map or two whenever I traveled to some faraway country,” Smith explains. There are over 200 maps in the collection, the oldest a 1493 map by Herman Schedel, a map of Constantinople (modern day Istanbul). There are a number of other maps from the 1500s, but Smith also collects modern maps such as those made from satellite imagery. He told this writer, [I]t’s the older maps that I’m fondest of, particularly if they have a historical story about them.” In addition to collecting maps, Smith and his wife, Susan, play golf and travel, but he says, “[O]ur five grandchildren are the top interest today!”