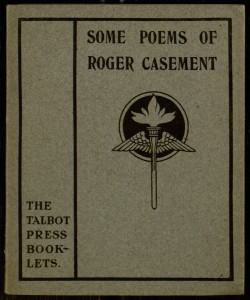 According to the introduction to Some Poems of Roger Casement, Irish nationalist Roger Casement “would have been the last to lay claim” to the title of poet. However, he did occasionally compose or translate poetry, and this slim volume collects some of his work. Gertrude Parry’s introduction, written just two years after Casement’s death, goes on to provide some brief and affectionate biographical notes on the author, whose path eventually led him to be executed by the British government on treason charges. While the text is brief, the anecdotes and private compositions it contains should interest those studying Casement.

The entire volume may be read online or downloaded through Project Gutenberg.