'Caturday: The 'Cat and Commodore Barry

In May 2009, Villanova University partnered with the Independence Seaport Museum to digitize the Barry-Hayes Papers. These historic documents relate to Commodore John Barry, an American Revolutionary War hero and “father of the United States navy.” Our most eminent Wildcat, Villanova University President the Rev. Peter M. Donohue, OSA, PhD, ’75 CLAS, Lori Dillard Rech, then president of the Independence Seaport Museum and Niall Burgess, then Consul General of Ireland, were among the dignitaries (pictured left to right) present at the official signing of the partnership agreement. 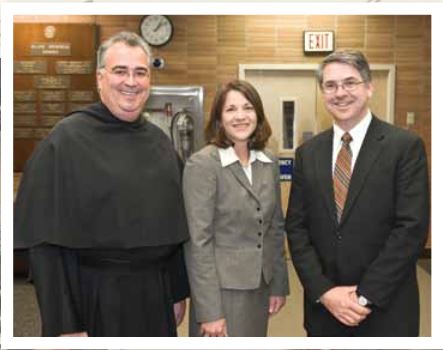 Flash forward to 6 years later as Father Donohue is awarded the 2015 Barry Award. The award recognizes an American who, “by his or her character and contributions to the Church and community, and by professional accomplishments, has distinguished him/herself.” As noted in the official press release, Father Donohue is “being honored for his dedication to academic excellence and his commitment to seeing Villanova University’s Augustinian ideals put into action on campus and beyond.”

The digitization of the Barry-Hayes Papers is a perfect example of how Father Donohue has impacted the campus and the wider scholarly community.

Read more about the digitization partnership in the Fall 2009 News From Falvey newsletter.

Read the full story of the prestigious Barry award on the Villanova University Media Room website.