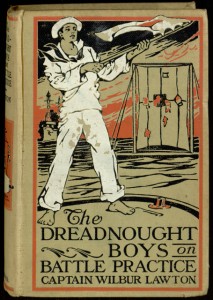 The latest completed Distributed Proofreaders project is another boys’ series book from author “Captain Wilbur Lawton,” most likely a pseudonym of John Henry Goldfrap. The first volume in a series of naval adventures released shortly before the start of the first World War, The Dreadnought Boys on Battle Practice follows the adventures of two young farm boys who decide for a dramatic change of lifestyle and join the navy.

In classic series book fashion, the honest and noble youths achieve astonishing success while defeating a gang of villains who are not just evil, but also incredibly discourteous. The patriotic action is mixed with information about naval practices and technology that must have appealed to young readers interested in the subject matter at the time.

The entire book may now be read online or downloaded in eBook format at Project Gutenberg. More titles from the series will be forthcoming.