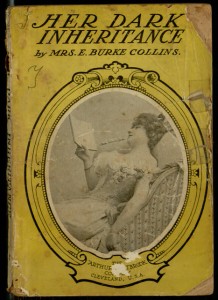 The latest eBook project we have completed with the help of Distributed Proofreaders is the 19th century melodrama Her Dark Inheritance by Mrs. E. Burke Collins. The story revolves around Beatrix Dane, a young girl whose past contains a secret so horrifying that its revelation eventually kills her adoptive father. While not as well-constructed as the generally similar works by Mrs. Alex. McVeigh Miller, and containing several of the expected offensive stereotypes of the period, this is still a fun read, both for the shocking secret (which is nearly impossible to guess, and doesn’t actually make a whole lot of sense) and for some of the over-the-top dialog. Our heroine’s tortured (and constantly soliloquizing) Uncle Bernard offers some particular gems, such as this one:

“Thought! Never think, Simons. Don’t let me ever hear again that you indulge in the pernicious habit of thinking! Great Heaven! what would I not give to drown thought—to bury it out of sight—deep, deep—so deep that nothing on earth would ever have the power to resurrect it! Thought—memory! Bah!”

For the rest of this speech, and a great deal more, you can find the full text of the novel online at Project Gutenberg, where it can also be downloaded in a variety of popular electronic formats.