Our latest completed proofreading project is something of a sequel to one of our earlier releases, Atchoo!, being part of the same “S&S Humor Library.”  Like its predecessor, the new release, Jiglets, is essentially a transcription of a Vaudeville routine, but while most of the S&S humor books were written by George Niblo, this title is the work of Walter Jones, a performer popular enough to be found in gossipy newspaper articles, among other places.

As with Niblo’s work, this is clearly a product of its time — there are references to forgotten celebrities that won’t mean anything to most contemporary readers, and there are politically incorrect jokes that are completely inexcusable by modern standards. In spite of these substantial obstacles, Jones’ work has a certain flow to it that makes it a surprisingly pleasant read (at least when it stays out of mean-spirited territory), and while it won’t have you rolling on the floor, it is funnier than many of its contemporaries. 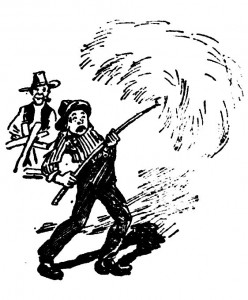 One day a neighbor came across Willie hustling like old Sam Hill to reload a wagon of hay which had overturned.

“Well, Willie, I see you are in trouble.”

“Suppose you come to the house and have dinner with me,” says the neighbor.

Willie wouldn’t hear of it. The man finally persuaded him to go.

All the way to the house and at dinner Willie kept saying:

“I shouldn’t have come. I know dad won’t like it.”

“Why,” says the neighbor, “your father will never know unless you tell him.”

“I know, I know,” says Willie, “but I’m sure father won’t like my going to dinner with you.”

“Darnation,” says the neighbor, now thoroughly worked up. “Why won’t he?”

For a sampling of what passed for funny in 1903, you could do worse than to take a look at this book.  If you decide to take the plunge, you’ll find it available for online reading or download in several popular formats at Project Gutenberg.