eBook available: The bride of the tomb; and, Queenie’s terrible secret 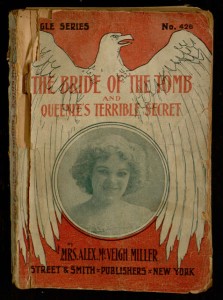 Regular Blue Electrode readers will remember that we discovered a hidden cache of “dime novels” (and other turn-of-the-century popular literature) last summer and that we are adding some of our digitized titles to Project Gutenberg’s distributed proofreading project. We are pleased to announce the combination of these efforts with the completion of our first dime novel to go through the Project Gutenberg process: The Bride of the Tomb; and, Queenie’s Terrible Secret, a two-in-one volume, by Mrs. Alex. McVeigh Miller, now available to read online or in a variety of electronic formats for various ereading devices.

Demian and I both read this and we had a lot of fun! Both of the novels in this two-in-one edition were full of clichés and extremely predictable plot “twists,” but they each also had a few surprises, which was nice — not quite the formulaic romance novels we were expecting! Both of the stories have fairly similar basic plots (people who seem to be dead but are not really dead and instead have been abducted), which is probably why they were packaged together, but they each have their own slightly different twists and turns. Of particular interest, the women characters in these stories are much more active than the men, even the supposed “heroes” (but of course the women still do their fair share of swooning). Queenie also makes use of some unexpected narrative devices, such as nonlinear storytelling (it may not be done particularly well, but it’s still noteworthy in a late-19th-century text).

If you’re into marginalia, you should make sure to look at the page images of this book in our Digital Library as well. This book was part of our original dime novel discovery, so we believe the writing may be that of Dr. Charles Magee, language professor and literary adviser to The Villanovan in the 1920s (we’ll have more about Dr. Magee later). There are many brief (mostly one-word) notes on the plot and literary devices.

Although they may not be paragons of literature, these stories are quite fun and they do offer several surprises. And if you’d like to join our Mrs. Miller fan club, just let us know!