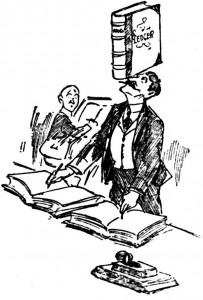 Another of our proofreading projects has been completed: George Niblo’s Atchoo! Sneezes from a Hilarious Vaudevillian, which started the process in August.

As mentioned previously, this book is a transcript of a live comedy routine from 1903.  For the most part, the humor has not aged well, particularly since there are quite a few nasty ethnic stereotypes on display.  However, some of the book’s targets are still considered fair game in some circles today — lawyers, policemen, newlyweds — and many of the jokes have a familiar ring to them.  Puns haven’t changed much in over a century.  Here is a representative example:

My brother Tom was hit on the head some time ago, and at the hospital they said they would have to amputate half his brain. I didn’t want them to, because he is absent-minded anyway.

“We’ll have to give him something to make him sleep,” said one of the surgeons.

“That won’t be necessary,” said another; “he’s a policeman.”

That made Tom sore, and he snapped: “I’ve got half a mind to cave in your ribs for you.”

“You won’t feel that way in a minute,” said the surgeon, “because that’s the half of your mind we’re going to cut out.”

It was a great operation. When I told my wife of the surgeon’s little joke and how Tom came back at him she said she never knew a time when Tom wasn’t ready to give anybody a piece of his mind.

If you are interested in the full experience of reading a Vaudeville routine (and are fully prepared to be offended), the complete book is now available for online reading or download to electronic reading devices from Project Gutenberg.