Have you noticed the empty shelves where the DVDs, CDs and audio books used to be shelved? Don’t worry; they were relocated to Falvey West in preparation for the next phase of the library renovation project. 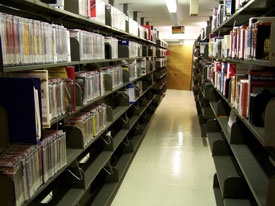 Liberato said, “As shelving supervisor I wish to extend my commendations and appreciation to the … group of hard-working folks in recognition of the great job they did in transferring the DVD collection, the audio book collection and the music CD collection…” He noted that the work began on a November Monday morning and was completed by the afternoon of the following day.

The current periodicals browsing collection will be moved to Falvey West in the near future.