Friday Film Review: Let Me In 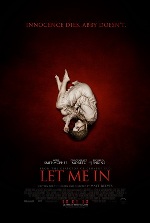 Pardon the expression, but vampire movies suck. The genre has become so saturated with bad, cheesy films that it seems like every week another awful one is coming out in theaters. In recent times we’ve unfortunately had the Twilight series, 30 Days of Night and True Blood to sit through. Who knew that all this genre needed was a great story and the absence of shirtless teens endlessly staring at each other with angst?

Let Me In is a remake of a Swedish film which was based on the book, Let the Right One In. The movie follows 12-year old Owen who is the product of a broken family and who is being bullied in school, which leads to serious psychological issues. In comes Abby, a weird 12-year old who lives next door with her guardian. The two befriend each other with Abby helping Owen overcome his problems and Owen accepting Abby for being a vampire.

This may sound like a cute kid’s movie or something that won’t interest you, but I think this film will surprise you. The story is mature and tight, the acting is superb and the suspense is almost palpable with a Hitchcock-like style. What takes this film to another level is the directing and editing in the movie. The pace is amazing and the technical camera work is outstanding (specifically, a creative car scene I won’t ruin and that was shot in one take). This film is a “must watch;” it’s not quite in the realm of horror, but very suspenseful.

(DVDs are located on the first floor and circulate to Villanova faculty, staff, and students.)