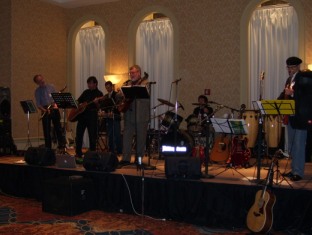 We all know that librarians are resourceful, intelligent and helpful, but on Thursday, March 31, the second night of the biennial Association of College and Research Libraries (ACRL) Conference in Philadelphia, a group of librarians billing themselves as “Marc Fields and Bad Data” demonstrated that they can also be musical and even theatrical—in short, that it is indeed the case that “librarians rock!”

In the course of three 45 minute sets, Marc Fields and Bad Data led a packed ballroom of colleagues and friends on a musical journey through styles ranging from folk and bluegrass to sixties rock and electric jazz, on a diverse collection of instruments including—in addition to the drums, bass, guitars, and keyboard of a typical rock band lineup—viola, harmonica, tenor sax, banjos and concertina.

Of particular interest were a handful of library-themed original songs, composed by band members especially for the event. These songs, covering topics of interest in the library world such as the demise of MARC cataloging, printer malfunction, and the authoring of open-source library applications, were crowd favorites and exemplified the tone of camaraderie and revelry in librarianship felt overall at the ACRL Conference.

The group formed in response to a call for librarian musicians by Falvey Memorial Library Director Joe Lucia. Lucia’s concept was a unique pairing of music and librarianship with few precedents in the history of the American Library Association, and certainly none as elaborate or successful, thanks to Lucia’s vision as well as to the generous sponsorship of the event by library membership organization Lyrasis.

Among the musical librarians who answered the call were library professionals from area colleges such as West Chester University, Richard Stockton College of New Jersey, Villanova University and St Joseph’s University, as well as the farther out-of-town locales Western Michigan University and Minnesota State University.

After just three afternoons of rehearsal, Marc Fields and Bad Data took it to the stage and rocked the house, with all of the diligence and humor one would expect  from members of this noble and artful profession.

Marc Fields and Bad Data take their name from the MARC, or MAchine Readable Cataloging, system, developed in the 1960s to automate the exchange of bibliographic data. A library cataloging mainstay for decades as libraries gradually introduced computers into their cataloging workflow, the MARC system is now in the process of being phased out in favor of more Internet-friendly standards.

As for Bad Data, this band is hotter than an inaccurately copied OCLC record; as singer Huey Lewis once sang during the MARC system’s heyday, “Sometimes bad is bad!”

Missed the show? Check out these videos.

The band members were