Mothers In Charge Founder to Speak on Surviving Tragic Loss 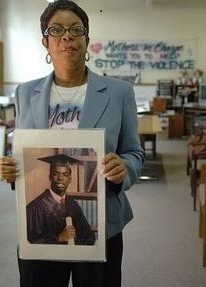 In celebration of Women’s History Month, Falvey Memorial Library will host a moving lecture by the founder and executive director of Philadelphia-based non-profit Mothers In Charge, Dorothy Johnson-Speight, MHS, LPC.  The event will take place on Tuesday, Mar. 15, 2011, at 4:00 p.m. in the Library’s first floor lounge.

Mothers In Charge is a grassroots organization working for violence prevention, education and intervention for children, young adults, families and community organizations. Johnson-Speight founded the organization after the 2001 murder of her 24-year-old son Khaaliq. The murder as the result of a parking space dispute.

In 2009, the organization published the book Mothers In Charge – Faces of Courage, which tells the mothers’ stories (and their children’s) in their own words.  The book will be available for sale at the event, and all proceeds will go to supporting the organization’s work.

The event is free and open to the public.

The Center for Social Justice Film is part of the Waterhouse Family Institute (WFI), housed within the communication department in the College of Liberal Arts and Sciences.