The library, originally located in Dougherty Hall, has moved several times since the University was founded.  Parts of the collection were housed in Mendel Hall, St. Mary’s Hall and  Austin Hall. As head librarian from 1940 to 1962, Father Falvey devoted himself to the creation of a unified collection and modern, scholarly spaces for University students and faculty.

He guided the fund raising and construction of a new library at a time when the country was recovering from World War II. It seems fitting that on the 70th anniversary of his appointment as head librarian we honor his dedication to growth and a “scholarly atmosphere,” even while our country faces economic and political challenges.

Father Falvey set the example of collaboration, seeking out the financial support of friends and alumni who believed in the advancement of the University. His leadership was admired by many, not only for his innovative ideas, but also because of his generosity and humility. During the planning phase for what is now known as Old Falvey Hall, Father Falvey took the opinions of his fellow priests into consideration and shared their ideas with the architects and builders. He also embraced the concept of allowing Radnor township residents access to the new library.

In addition to these accomplishments, Father Falvey chaired the department of library science, acted as chaplain to Rosemont College, and instituted librarians’ conferences and annual publications meetings in which the “wisdom and experience of the many” might be brought to bear on the Catholic intellectual life at Villanova University. 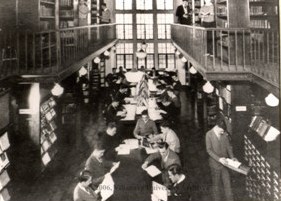 Although originally named the “Villanova College Library,” it was later rededicated in  memory of Father  Falvey, recognizing his lifelong commitment to the library and the University. During the 1963 ceremony, Rev. Ralph Shuhler, J.C.D., referred to Father Falvey as a “truly great man” who saw the library as “his child” and who treated his colleagues and co-workers with respect and Christian charity.

Years later, due to enormous growth in the student population between 1949 and 1966, as enrollment grew from 1500 to 4700 full-time undergraduates, it was clear that a new library was needed. It seemed only fitting to remember the man who guided the original library toward intellectual excellence and modern facilities.

Falvey Memorial Library was opened in 1967 and continues to serve the current Villanova University population. The spirit of Father Daniel Falvey still influences the administration and staff of the library today, inspiring us to improve the facility, the collections and the services.

Visit the memorial display for Father Falvey which has been mounted on the first floor of the library.

(Sources for this article can be found at http://oldlibrarysite.villanova.edu/services/exhibits/falveyshistory/index.htm.)