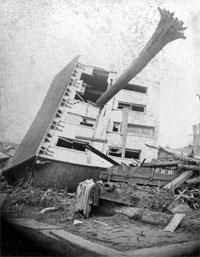 A house in Johnstown after the 1889 flood

Dr. Chadderton, a professor and chair in the department of civil and environmental engineering, will investigate and reconstruct historic floods in the Johnstown, Pa. area, caused by dam failure. He points to the historic nature of the floods, especially the “Great Flood” of May 31, 1889, as a major point of interest.

“As a faculty member at Penn State,” he explains, “I was involved with a study of one of the Johnstown floods. It was a mathematical modeling project. Also, as a ‘history buff,’ I had read various articles about the 1889 flood.” The disaster resulted in the single largest number of civilian deaths at the time and the first major disaster relief effort handled by the American Red Cross.

Johnstown is often referred to notoriously as “The Flood City.” Subsequent laws, taxes, music, art and literature related to its flooding have been created. Several historians have written about the Great Flood; in addition, fiction authors such as Catherine Marshall and Caitlín R. Kiernan have used the historical event as inspiration. Additionally, Bruce Springsteen mentions the Great Flood in his song “Highway Patrolman.”

“The lecture,” Dr. Chadderton notes, “will include some history, some general engineering ideas and some results of my mathematical study of an historic flood event. Hopefully, it will have some content of interest to listeners with differing backgrounds.”

The event is free and open to the public. (Click this link to watch a video of the event.)