Living Behind the Walls: Looking Back at U.S. Penology 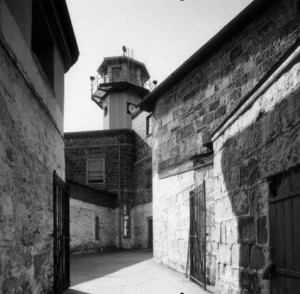 Among the many DVD’s acquired by the Library this year is one stand-out, Eastern State: Living behind the Walls. This documentary, written and directed by Tony Alosi, gives a brief history of Eastern State Penitentiary, followed by a description of life in the prison during its final decades.
When it opened in 1829, Eastern State was viewed throughout the western world as a major innovation in penology, bringing visitors from around the world (including Charles Dickens in 1842). Through the nineteenth century, it emphasized personal reflection within solitary confinement as a key component of rehabilitation, a philosophy finally dropped when too many prisoners developed insanity. The video also gives some details to Al Capone’s incarceration (who continued to run the Chicago mob from his cell) and the prison’s one successful jailbreak carried out by Clarence Klinedinst and Willie Sutton. The penitentiary closed in 1972.
The film gives an honest look at life within Eastern State as detailed through interviews with former staff and inmates. They provide some frank descriptions of the violence and rape the prisoners regularly endured, both from each other and from the guards. Former inmates describe how they turned their individual lives around. The film ends with scenes from a reunion of inmates and staff thirty years after the prison closed. Interspersed throughout the film are shots of the decayed prison as it appears today.
Of course, if you find the film interesting you can visit the prison itself in the Fairmount section of Philadelphia. The program director is a Villanova Alumnus—Sean Kelley (class of 1991).
David Burke

Watch the film trailer on YouTube or read B. Belbot’s short article on Eastern State Penitentiary from the Encyclopedia of Prisons & Correctional Facilities.
Film website

Please feel free to contact us with any questions or comments that you may have.