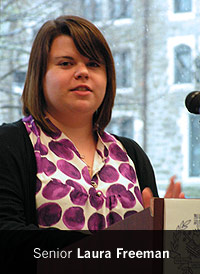 Jenny Nelson, another senior, offered “Ode to Headphones” and “Affirmations of a Big Footed Woman,” both of which depict familiar subjects in innovative ways. Kay Meyers, a community resident and graduate of Villanova University, provided a change of pace with her narrative poem inspired by an interfaith, multi-ethnic art exhibition.

Sam Silverman’s “Purpose and Porpoise,” featured a humorous conversation between these two notions and introduced a girl who, with her New York accent, pronounced them identically. Senior Brigid Black, also Class Poet Honorable Mention, complemented that poem by recalling her experience on Sept. 11, just three blocks from 2 World Trade Center, in “morning in manhattan.”

When my own name is called, I feel more nervous than I thought I would. I read “The Size that Dare Not Speak Its Name.” I later realize that the act of reading my own work — putting my own creativity on the line, so to speak, caused my apprehension.

Sinéad Cloughley read next. “A Two-Year-Old Dreams of the Sea” contrasted her perspective as a child to that of herself as a young adult. Then Christine Simmons returned to the microphone to share “wandering, treading, dreaming,” featured in Arthology.  And Laura Freeman, a senior, offered “Appalachia.”

The senior poets have poems posted in the library and have submitted poetry for the Senior Class Poet competition, won by Danielle Robert.

Marylu Hill, Ph.D., assistant director, Villanova Center for Liberal Education, read “The Ruin” and “Alice at 40.”  And Kevin Peterson shared three poems that appear in Arthology: “Chicago Musings,” “A Drive Without a Plan” and “Dry.”

Dr. Sewell, the event’s final poet, read “Rough Music,” a poem by Deborah Digges, her recently deceased former mentor. Dr. Sewell’s “Letters to a Young Poet” provided guidance and encouragement to those present and served as an ardent finale to the reading portion… and a start to the socializing portion of the poetry celebration.