A group of University faculty and staff gathered with family members outside the newly constructed library classroom on Feb. 16 on the first floor of Falvey Memorial Library to dedicate the teaching-learning space to the memory of Mary Ann Griffin, D.A., director from 1984 to 1995. The ceremony was modest and the words spoken, sincere, a fitting tribute to the late director’s quiet strength.

Rev. Dennis Gallagher, O.S.A., University archivist, read a contemporary rendering of the Beatitudes, recalling that Dr. Griffin always kept these teachings of Jesus Christ before her as her own personal “plan of action.” Fr. Gallagher honored Dr. Griffin as “a dreamer” and “a seeker of truth,” like St. Augustine.

Although he had not known Dr. Griffin personally, University Librarian Joe Lucia noted that he was continually aware of how her work “continued to resonate in the life of the library.” Building an excellent staff, transforming technical services, formalizing collection development and establishing library instruction were only a few of the ways Dr. Griffin brought a high degree of professionalism to Falvey. Lucia called her “a quiet, positive force behind many things.”

Michael Hoffberg, now with UNIT Technology & Architecture, whom Dr. Griffin hired as head of media services, recalled how impressed he was with the late director and how they “clicked” from their first telephone conversation. Louise Green, a Falvey Academic Integration librarian who also served as Falvey’s acting director at Dr. Griffin’s death, noted how Dr. Griffin had planned the previous instruction classroom, located on the second floor, and of her dedication to the teaching mission of the library.

Dr. M. Louise Fitzpatrick, dean of the College of Nursing, recalled welcoming Dr. Griffin as the second female member of the Dean’s Council. She remembered the former director as “a gracious, sensitive, loving person.”

As the harpsichord allowed Mozart to create music and tensor analysis informed Einstein’s theories, so Falvey formed the center and substance of Dr. Griffin’s life work, according to Joseph Griffin, husband of the late director. He told those in attendance that Dr. Griffin shaped and enriched the library by drawing on her deep love of the academic world and her gift for institutional management.

Finally, Fr. Gallagher called everyone’s attention to the nearby exhibit case and specifically to the explanatory statement about the book, the trowel and the University seal, eloquent symbols of Dr. Griffin’s life and work. 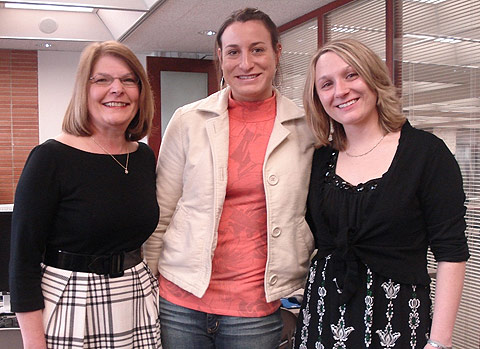 Also present for the ceremony were Dr. Griffin’s sister and brother-in-law, Diane (pictured left) and Robert Cunningham, as well as her nieces, Jamie (right) and Jody Searfoss (center).