War is “months of boredom punctuated by moments of terror.” (Letter to the London Times, November 1914) How do thousands of young men, with little to entertain them, break up the tedium? During the Great War, the extreme monotony of trench warfare combined with a relatively new and plentiful source of material, in the form of brass cartridges, led to a boom in creativity. Soldiers produced prodigious amounts of art by carving bones, melting aluminum and casting it in the mud, or pounding out items from expended brass. A Canadian soldier crafted an entire tea set for his mother from shell casings.

Trench art includes items made from found objects by soldiers, sailors, POWs, and civilians at the front, behind the lines, in hospitals, or at home. The term originated with World War I, but armed forces throughout history have created art. Any surface was liable to be decorated. The paintings on airplane fuselages are a very visible and popular form of art from World War II. Currently on exhibit on the first floor of Falvey Library is an embellished World War II duffel bag from our Reap collection. 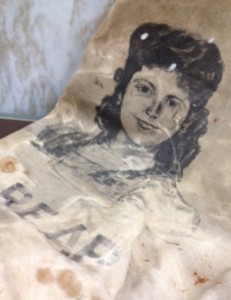 As seen in National Geographic, soldiers in World War I created amazing graffiti in the caves, quarries, and wine cellars of France and Belgium. No simple “Kilroy was here,” these carvings were elaborate and painstakingly carved symbols, relief sculptures, and memorials. 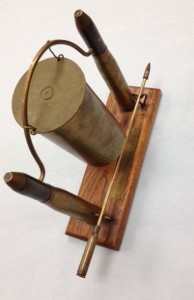 Two large caliber shells support a casing gong with a striker, made from a 30.06 cartridge, resting alongside. It is labeled for use in the “Sergeant’s Mess,” 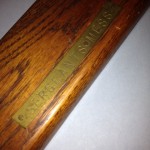 indicating that it was most likely created by British or Commonwealth troops for the non-commissioned officer’s dining facilities. American troops traditionally had only an officers’ and an enlisted men’s mess.

Beyond art’s function as record or monument, we do not normally link it with war. Yet, like diaries, letters home, or scrapbooks, art can be an expression of memory, history, and collective experience. As such, it is an important part of the war record and a valuable connection. Trench art provided, and continues to provide, an escape from ennui, an outlet for emotion, and mental exercise for soldiers under extreme conditions and far from home.