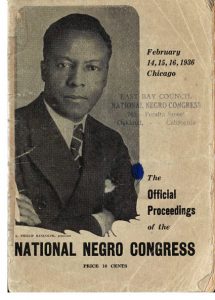 Labor rights were an important facet of the civil rights movement and figured prominently on the program of the National Negro Congress (NNC). Some union excluded African Americans while others limited their rights in one way or another. The Communist Party of the United States of America, which promoted worker solidarity across racial and national boundaries, supported the work of the NNC. Although the NNC did not expressly favor any political party some of its members were affiliated with the Communist Party. James W. Ford, one of the co-founders of the NNC, was three times selected to run as the Communist Party’s vice presidential candidate. The novelist, poet, and activist Richard Wright was likewise affiliated with both organizations. Other prominent members of the NNC included the singer, actor, and activist Paul Robeson and Asa Philip Randolph, the founder of the Brotherhood of Sleeping Car Porters. African America, Communists, and the National Negro Congress (AACNNC), a collection of primary sources documenting the work of the NNC is available at Falvey Memorial Library. The papers in the collection outline the history of the NNC from its inception to its dissolution.

John P. Davis, a lawyer, journalist, and activist, who was the driving force behind the NNC, envisioned it as an umbrella organization that would unite and focus existing efforts in the struggle for equal rights and thus increase national impact. He already had an extensive network of connections among African American organizations, such as the NAACP and the Brotherhood of Sleeping Car Porters from his prior work with the Joint Committee on National Recovery.

The NNC convened for its first national convention in Chicago on February 14, 1936. Richard Wright attended the convention and wrote about it in an essay entitled “Two Million Black Voices,” which appeared in the communist magazine The New Masses (Feb. 25, 1936, p. 15). In it he vividly evoked a sense of shared purpose and hope.  African American newspapers likewise reported on the Chicago convention. Throughout the month of February The Chicago Defender informed its readers about the activities at the Convention in great detail. It also published the resolutions adopted by the NNC.

The oldest documents in the AACNNC collection date back to 1933, predating the formation of the NNC by a few years. The papers from those early years document the efforts to get the new organization off the ground. The range of documents in the collection includes print materials as well as typed and hand-written manuscripts from the papers of John P. Davis, Edward Strong, and Revels Cayton, who served as executive secretaries from 1935 to 1947, as well as Davis’ files from the Negro Industrial League and from his work on the Joint Committee on National Recovery along with records of the Negro Labor Victory Committee. The original documents are preserved at the Schomburg Center for Research in Black Culture, which provides a detailed description of the collection on its website.

Villanova students, faculty, and staff may access the collection on Gale’s Archives Unbound platform via the Library’s Databases A-Z list under “A”.