For the month of December the blog will be featuring holiday themed materials from Falvey’s Distinctive Collections.

“Christmas Eve” is the first story in the children’s book Bright Flowers: Choice Stories for Little People, published in New York in 1889. This 19th-century illustrated children book is formatted with a short story on the left page with a corresponding image adjacent to the text. 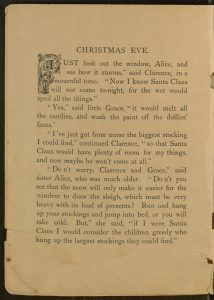 In the story “Christmas Eve”, three children (Alice, Clarence, and Grace) worry that Santa won’t be able to visit them on Christmas Eve because of the snow. The eldest of the children, Alice, assures her younger siblings that the snow will actually assist Santa’s sleigh pulled by reindeer in their travel. However, she cautions her siblings against being greedy children only concerned with receiving presents during the Christmas season.

The History of Santa Claus in America

American folklore around Santa Claus came out of New York in the 19th-century, which is when and where this book was published. Washington Irving, the author of “Rip Van Winkle” and “The Legend of Sleepy Hollow”, led a movement to create a Santa who was family-friendly and cheery in response to the carnivalesque Christmas celebrations that occurred during this time. This version of Santa Claus was inspired by the Dutch Sinterklaas. When adopted to an American tradition Santa Claus diverged from Sinterklaas by wearing a bright red fur coat rather than a bishop’s robe, is plump not thin, and drives a team of flying reindeer instead of traveling by flying horse. 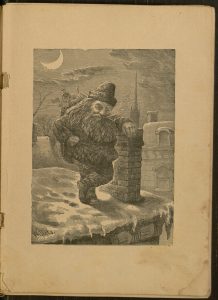 “Christmas Eve” and the depiction of Santa in Bright Flowers is an attempt to circulate this new image of Christmas and Santa to American families. This and other 19th-century popular literature books can be found in our Dime Novel and Popular Literature Collection, many of which are available in the Digital Library.

How will you be celebrating the Christmas season at Villanova?

Take a trip back in time to Villanova Christmases of yore and glimpse how Villanova alumni celebrated the holiday season with Santa Claus and friends in the Belle Air yearbooks, available in our Yearbooks Collection. 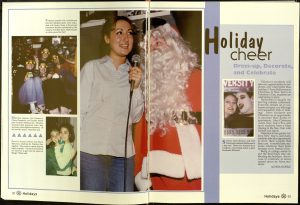