‘Cat in the Stax: Villanova Theatre Presents Songs for a New World

Songs for a New World is more of a song cycle than a traditional musical, making it adaptable to today’s virtual climate. The entire show was rehearsed and filmed in isolation, except for the final number, filmed on stage of Villanova’s Topper 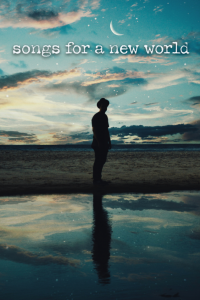 Theatre in the new John and Joan Mullen Center for the Performing Arts.

When watching the performance, I was struck by the dedication and talent of the artists. Live theatre and film are not the same at all and require different skill sets, yet the cast of Songs for a New World went above and beyond to give a high quality performance. Despite not having a stage and set to perform on, the performers used their environments in creative ways to bring a new perspective to the songs in the show.

The beginning of the show emphasizes the isolation that many of us are feeling during the pandemic as the performers are seen together on Zoom and concludes with everyone together on stage. The show takes the viewer on a journey from isolation to togetherness.

During the Songs for a New World Speaker’s Night Scaramazza shared, “The end of the show is meant to feel like actual connection. While there is no physical touching, the goal is to make it feel like a big warm hug of people being together in a time when it is difficult to be together and creating art when art is more difficult.”

Songs for a New World tells the story of 16 different characters and situations through a wide variety of song genres from pop to gospel to jazz. Ultimately, it was the perfect production for Villanova Theatre to take on as we all enter into a new world.

Tickets are available for $10 here until Sunday, Feb. 14. Visit Villanova Theatre’s website for dramaturgical resources or to watch the Songs for a New World Speaker’s Night.