While fans of the Harry Potter series would have met the beloved wizard in 1997, he was actually born years earlier, in 1980. Author J.K. Rowling gave the young wizard a July 31 birthday, the same as her own.

In the first book in the bestselling series, Harry Potter and the Sorcerer’s Stone, we meet Harry shortly before his eleventh birthday.

Harry, played by Daniel Radcliffe in the film, is making a cake for himself out of the dirt on the floor when Hagrid enters the movie with a perfectly charming birthday cake. The movie clip is often shared on social media around this time. 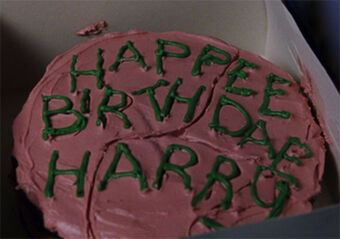 Even though the series is considered a cornerstone of modern young adult literature, both young and old readers have grown to love Harry, Hermoine, and Ron. Since the release of the first novel in 1997, the books have found immense popularity and commercial success.

As of February 2018, the books have sold more than 500 million copies worldwide, which makes them the bestselling book series in history, and has been translated into 80 languages. The seven books were adapted into an eight-part film series by Warner Bros. Pictures, which became the third highest-grossing film series of all time as of February 2020, after the Marvel Cinematic Universe and Star Wars.

The success of the books and films has led the Harry Potter franchise to create numerous derivative works, including a traveling exhibition that premiered in Chicago in 2009, a studio tour in London that opened in 2012, a website in which Rowling updates the series with new information and insight (Pottermore), and spin-off films (Fantastic Beasts) and a play (Harry Potter and the Cursed Child). Finally, the ultimate HP fans make the trek to The Wizarding World of Harry Potter, a part of the Universal Parks & Resorts amusement parks around the world.

Daniella Snyder is a former graduate assistant for Falvey Memorial Library and a graduate student in the English department.