Digital Scholarship at Its Finest: Letterpress Editions on the Rotunda Platform

Some of the largest book sets on the shelves of Falvey Memorial Library are letterpress editions of the papers of the nation’s founding fathers and other influential political figures. Their sheer size and the outsized scholarly effort that it takes to bring together in one place historical documents that are widely dispersed over hundreds of archives, libraries, and private collections are awe-inspiring.

Some of these editorial projects took decades to publish while others have yet to be completed. Among the latter are the papers of Thomas Jefferson. The planning for a comprehensive edition of Jefferson’s papers began in 1944 and the first of sixty originally projected volumes was published in 1950 by Princeton University Press. Over 50 volumes have been completed under the direction of five consecutive general editors at this point. 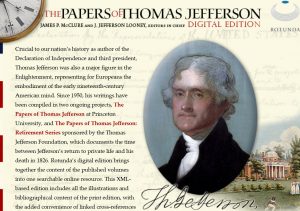 Many of these letterpress editions have been transformed into digital editions in recent years. Editions published by Rotunda, the electronic imprint of The University of Virginia Press, combine “the originality, intellectual rigor, and scholarly value of traditional peer-reviewed university press publishing with thoughtful technological innovation designed for scholars and students.”

For example, all Rotunda projects follow text encoding initiative (TEI) guidelines, thus opening up the individual and collective text corpora to text mining and text analysis projects. Over the years, Falvey Memorial Library acquired many of the Rotunda editions to facilitate new modes of scholarship. For example, scholars need no longer work with a corpus in isolation, but can now query all the Rotunda editions simultaneously.

The University of Virginia Press grants temporarily free access to all collections available through its Rotunda imprint in response to the COVID-19 crisis, which has closed many library buildings and made the letterpress print editions of presidential papers inaccessible. Collections that are only temporarily available are highlighted below.

Note the recently added collection of The Papers of Woodrow Wilson. Links to the collections owned by the Library can be found in the Library’s catalog. The Library’s Databases A-Z list includes a link to the American History Collection on the Rotunda platform. 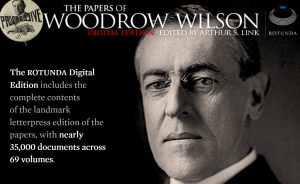