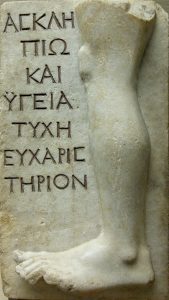 Votive relief for the cure of a bad leg.
Marble. British Museum.
Courtesy of Wikimedia Commons.

The Supplementum Epigraphicum Graecum (SEG), now available online to the Villanova community, is a critical discovery tool for classicists working with ancient Greek inscriptions. The study of inscriptions, commonly known as epigraphy, goes back to the 16th century when travelers and explorers informally began to trace and collect ancient inscriptions. By the early 19th century with the publication of the first systematic collection of ancient Greek inscription, the Corpus Inscriptionum Graecarum by August Böckh, epigraphy had matured into an academic discipline.

The historical paper record overshadows inscriptions as primary sources in most areas of specialization outside the field of ancient history, but texts chiseled in stone, etched into metal surfaces, or scratched into clay tablets constitute a historical record for most cultures and time periods. These texts offer a self-conscious portray of events and people intended for posterity. Modern examples of inscriptions include the much-visited Vietnam Veterans and 9/11 memorials, which present a modern-day historical record for generations to come.

While inscriptions are often on the more “stuffy” side, the corpora of ancient inscriptions also include graffiti, which add layers of competing and occasionally irreverent public opinion to the “official” public record. The KILROY WAS HERE etching at the back of the World War II Memorial in Washington, D.C. is a wonderful example of piggyback messages on public monuments.

McLean, B. Hudson. An Introduction to Greek Epigraphy of the Hellenistic and Roman Periods from Alexander the Great Down to the Reign of Constantine (323 B.C.-A.D. 337). Ann Arbor: University of Michigan Press, 2002.

Access to SEG is available via the Library’s Databases A-Z list and the catalog. Consult the SEG Search Tips if you are new to this resource or ask a librarian for assistance.