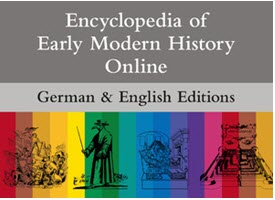 Scholars interested in the early modern period (1450-1850) will appreciate Brill’s Encyclopedia of Early Modern History for its interdisciplinary approach, focus on global connections, and unique European viewpoints and voices. Translating the Enzyklopädie der Neuzeit into English for a wider audience was a worthwhile but difficult project that is still in progress.

Most articles are concise and to the point. They are cross referenced with a core of in-depth key articles that deal with overarching concepts such as knowledge, culture, nationalism, race, colonialism, the environment, the Atlantic world, and the everyday world to name just a few of the themes covered. While most article titles are translated into English, in some cases editors decided to retain German terminology for the sake of clarity (e.g., Bildungsbürgertum and Frauenzimmer).