Robin, you will be missed! 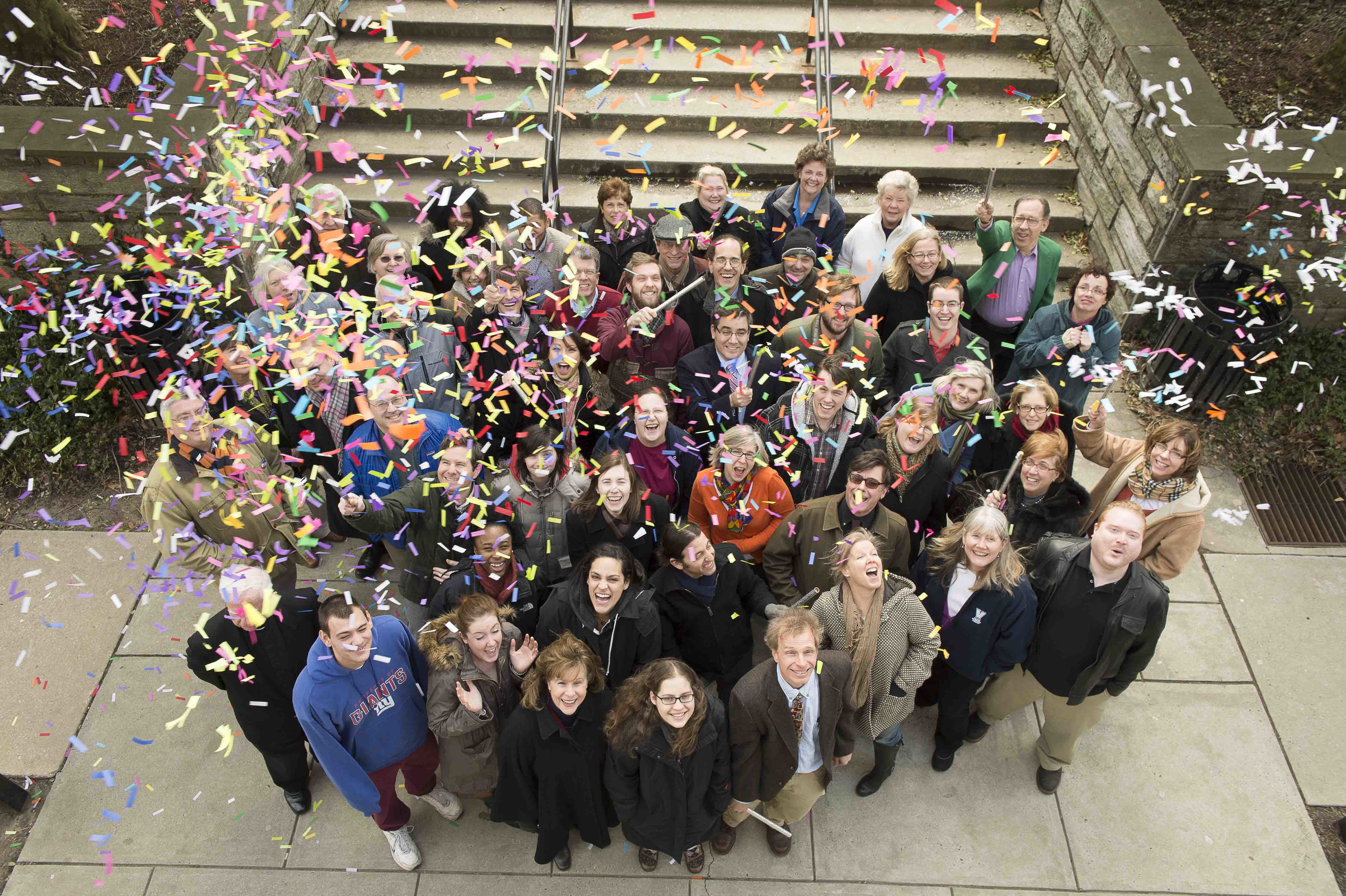 Reflecting on her favorite memories at Villanova University, she recalled a 2013 photo shoot. “We were all standing on the front steps of Falvey thowing confetti,” she said. “Getting ready for that picture was hilarious!”

When I entered Robin Bowles’ office during her last week at Falvey Memorial Library, I found her trying to stuff a large stack of papers into a binder.

She told me that after announcing that she would be leaving Villanova, words of encouragement and positivity from students, faculty, and staff flooded her email inbox. People wished her luck in her new role, expressing how much they would miss her and how greatly she impacted the Villanova community.

Bowles printed out every single email.

After telling me this information- while still trying to make every piece of paper fit into the binder- she smiled and said, “It’ll be good for when I need a pick me up someday.”

At Villanova, Bowles held a variation of the same role for almost ten years. She was always the biology subject librarian, a position that relies on her Bachelor of Science degree from West Chester University. Later, Bowles’ role expanded to encompass the M. Louise Fitzpatrick College of Nursing as well.

Despite her enthusiasm and passion for her career, Bowles did not originally have dreams of becoming a librarian. It was a friend that sparked her interest after college.

“You search Google like nobody I’ve ever met,” they said, and asked if she ever considered becoming a librarian. She laughed as she told the story.

While the friend’s observation was funny, it was also true. Bowles almost immediately started looking at programs, and went on to receive a Masters degree in information science from Drexel University.

After holding library positions in Colorado and York, PA, Bowles (originally from King of Prussia) was excited to return to the Philadelphia area when she received a job offer from Villanova University nearly ten years ago. She remarked that she profiled Villanova for graduate school, attended her high school graduation at the Villanova Pavilion, and once held a job at the Devereux Foundation, just down the road.

For Bowles, accepting the librarian position at Falvey “felt like a homecoming.”

It was clear that Bowles felt at home here. She kept her office door open, placed beautiful flowers and plants across her windowsill, and decorated her open wall space with countless doodles created by her two young daughters. She even let them cover her white board with colorful drawings of animals and aliens, and naturally she couldn’t bear to erase them.

Along with her home away from home, she also found her second family at Falvey. While Bowles loved so many elements of her job, she said she’ll miss the people most.

“The hardest part about this process is realizing that there is nothing that is going to match the people I have met at Villanova,” she said.

Now, she is headed to Montgomery County Community College, where she will serve as the director of two academic libraries.

In her new role, she is most excited to return to “get back to the basics” of research services and oversee a reference desk and the employees who staff it. She said, “I really miss being at the front desk, seeing everybody come in, getting the everyday questions.”

For Bowles, a library has “people power,” and she sees that power reflected in the Falvey Library staff. She is steadfast in the belief that Falvey subject librarians are the key to students’ success, and she will carry this belief and passion with her to Montgomery County Community College.

From everyone at Falvey Memorial Library, we thank Robin Bowles for her commitment, her spirit, and her love for Villanova University.