Fireworks and the Fourth 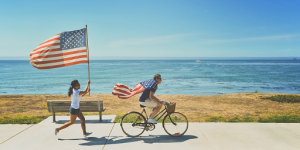 The Fourth of July has seemingly always had an association with fireworks…but how exactly did they become a nationwide tradition?

The truth is, we are simply honoring our Founding Father’s wishes by blasting off fireworks around the country. John Adams wrote in a letter to his wife, Abigail Adams, that the independence of America should be celebrated with “Pomp and Parade, with Shews, Games, Sports, Guns, Bells, Bonfires and Illuminations from one End of this Continent to the other from this Time forward forever more” on July 3rd 1776. With that said, the first fireworks display was held in Philadelphia in 1777 and it has continued ever since. In 2017 alone, $1.09 billion were spent on approximately 285.3 million pounds fireworks to create some of the most memorizing shows.

Originally, up until the early 1800s, it was common to set off cannons and fire guns at parades and celebrations to keep the ideals and actions of the recent wars relevant. Due to safety issues, the guns and weapons were phased out for a beautiful, explosive light show in the sky. The popularity of fireworks did not really stem from the United States, however, but rather from China. Around 200 B. C., it was a common tradition to roast bamboo stalks in a pit until they sizzle, causing the air within the hollow stalks to crack and explode. Ultimately this led to the idea and invention of fireworks. A couple years later Chinese chemists discovered that adding chemicals like potassium nitrate, sulfur and carbon, or what were the early concoctions of gunpowder, to the stalks generated more intense explosions and added the sparkle effect. In the 1830s, chemists found that to produce colors within the explosion, they could add metallic salts and potassium chlorate.

Over the years, we have found ways to create more extravagant firework displays that we enjoy annually. Furthermore, the connection between America’s treasured day and fireworks has become iconic though the famous lyrics of the Star Spangled Banner– “and the rocket’s red glare, the bombs bursting in air” which, though focuses on the bombing of Fort McHenry, goes along perfectly with the celebratory fireworks and represents the replacement of firing weapons for the celebration.

Now the next question is what’s the link between July 4th and hot dog eating contests? 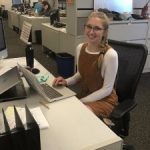 Article by Rebecca Wenger, a current senior at Marple Newtown High School in Newtown Square, PA. Wenger is a volunteer for the Communication and Marketing Dept. at Falvey Memorial Library as part of her final senior project. This fall, she plans to attend The University of South Carolina in pursuit of a BS in Marketing.