The Falvey Memorial Library would like to extend its deepest condolences to the Massimino family, the men’s basketball personnel who worked alongside Roland “Rollie” Massimino, and the entire Villanova community, who are currently grieving the loss of a great coach and a truly admirable man.

Massimino won an NCAA National Championship by leading the underdog 1984-85 Wildcats to an unlikely tournament win, but his career extended beyond Villanova University. His impressive coaching résumé boasts stints at the University of Pennsylvania, University of Nevada at Las Vegas, and Cleveland State University, among many others.

In December of last year, Massimino reached his milestone 800th college basketball win when his Keiser University team defeated Trinity Baptist by a score of 77-47. 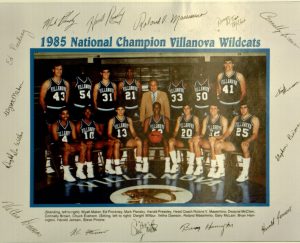 Ronald “Rollie” Massimino pictured with the other members of the 1985, championship-winning, men’s basketball team.

The pictures here are courtesy of the University Archives, which contain several more photos of Massimino during his tenure as a head coach and beyond. According to Special Collections and Digital Library Coordinator Michael Foight (who’s currently preparing to install an exhibit curated by Susan Ottignon and assisted by Laura Bang titled Wildcats Past and Present – which is going live today!),

“The primary purpose of the University Archives is to select and preserve and make accessible records that document the founding, growth, and functions of the University.   Our shared heritage shows the transition from a small community under siege in the wake of the Nativist Riots of 1844 through wars, changes in enrollment, and growth into exploring the worlds beyond the liberal arts into areas of new scholarship in science and technology, commerce, medicine and nursing.  This spunky school has grown and without the archival collections it would be hard to talk about and document the complex and compelling story that makes our Villanova University what it is today – a place of diversity and inclusion where the traditions of service and duty continue to mold the character of students today. “ 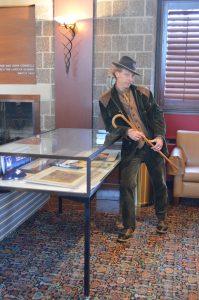 Michael Foight stands next to one of his Special Collections cases.

The Digital Archive also houses whole sections of Villanovana and is always available online!
Like
0
No comments yet