“The Latest Official News: Surrender of Lee and his whole Army to General Grant” 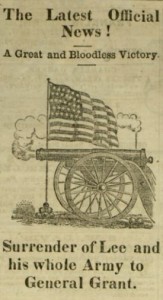 Transcribed text from the digitized copy in the Historical Society of Montgomery County Collection.

Surrender of Lee and his whole Army to General Grant.
______

The not unexpected but not the less welcome news of the surrender of Lee and his whole army to General Grant was telegraphed to Philadelphia on Sunday evening shortly after 9 o’clock. The joyful news reached Norristown yesterday morning at an early hour. The fall of Petersburg and Richmond did not afford as much joy as the news of the surrender of Lee and his Army. The news being confirmed by official dispatches, with the wings of the wind the good tidings aroused the whole population, bells commenced ringing, cannon were fired every demonstration of joy was made. We have the more reason to rejoice at this last, great bloodless victory, because it is regarded at the harbinger of peace to our bleeding country. May it bring true peace and Union, a union of hearts and a union of hands, a union of brotherly love. We have not the space to give the details of the movements of our armies which resulted so gloriously. Below we give the terms proposed by Grant and accepted by Lee by which the lives of thousands of brave men were saved from a useless sacrifice :

Appomattox Court House, April 9, 1865.–Gen. R. E. Lee, Commanding Confederate States : In accordance with the substance of my letter to you of the 8th inst., I propose to receive the surrender of the Army of Northern Virginia on the following terms, to wit: Rolls of all the officers and men to be made in duplicate : one copy to be given to an officer designated by me, the other to be retained by such officer or officers as you may designate : the officers to give their individual paroles not to take up arms against the Government of the United States, until properly exchanged; and each company or regiment commander, sign a like parole for the men of their commands. The arms’ artillery and public property to be packed and stacked and turned over to the officers appointed by me to receive them. This will not embrace the side arms of the officers, nor their private horses or baggage. This done, by each officer and man will be allowed to return to their homes, not be disturbed by United States authority, so long as they observe their parole and the laws in force where they may reside.

Headquarters, Army, Northern Virginia. April 9th 1865.–Lieut. Gen. U. S., Commanding U. S. A.: General–I have received your letter of this, date, containing terms of surrender of the Army of Northern Virginia, as proposed by you. As they are substantially the same as those expressed in your letter of the 8th inst., they are accepted. I will proceed to designate the proper officers to carry the stipulations into effect.