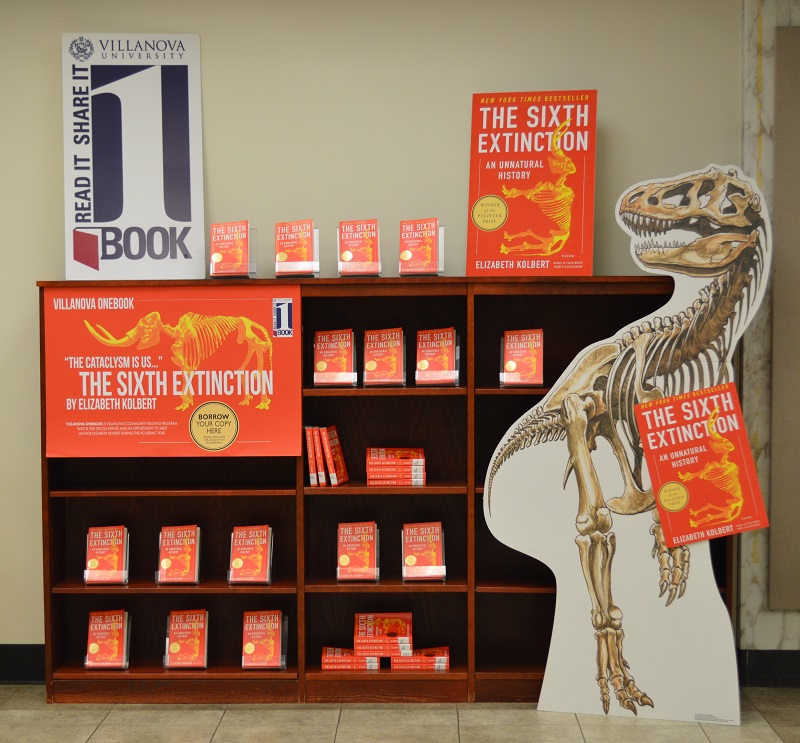 Are you still searching for something to read on a hot summer day? How about “The Sixth Extinction:  An Unnatural History,” the non-fiction Pulitzer Prize winning book by Elizabeth Kolbert? And if that isn’t enough to convince you that it is a good read, “The Sixth Extinction” is this academic year’s One Book Villanova selection, one of the “New York Times Book Review’s” ten best books of the year and a national book critic’s circle award finalist – all this in 319 pages.

Falvey has copies available to check out or you can purchase your own paperback for eight dollars at the circulation desk. And while you are in the Library do visit the exhibit created by Joanne Quinn, featuring copies of the book and a large prehistoric skeleton.

There have been five extinctions already, “the Big Five mass extinctions,” which reduced the diversity of life forms and we are now facing a sixth one, this one caused by humans. Kolbert says, “The story of the Sixth Extinction, at least as I’ve chosen to tell it, comes in thirteen chapters. Each tracks a species that’s in some way emblematic … The creatures in the early chapters are already gone … The second part of the book takes place very much in the present … One chapter concerns a die-off happening in my own backyard (and, quite possibly, in yours./ If extinction is a morbid topic, mass extinction is, well, massively so. It’s also a fascinating one. … I’ll try to convey both sides:  the excitement of what’s being learned as well as the horror of it.” (Kolbert, “Prologue,” p. 3.)

Kolbert, a journalist rather than a scientist, writes in a non-technical way that is readily understandable, although she documents her sources and includes a multipage bibliography. Nonfiction may not be your idea of light summer reading, but this book deals with the mounting losses humans are causing – we are the cause of a growing problem.

Each of the One Book Villanova’s co-chairs has commented on “The Sixth Extinction.” Teresa (Terry) Nance, PhD, Associate Vice Provost for Diversity and Inclusion and Chief Diversity Officer, says, “Kolbert’s description of what’s happening in nature and the environment takes on immediate and personal consequences. Even more important, many members of our Villanova community have already expressed their deep interest and concern about this topic.” Jeffrey Brown, Director of Student Involvement, says, “This year’s One Book Villanova selection combines the dialogue surrounding the scientific, moral, and theological implications of climate change. Through reading ‘The Sixth Extinction’ we come to a better understanding of the real changes happening right before us.  …”  ” ‘The Sixth Extinction’ will resonate strongly with the Villanova community. This generation of students is deeply and particularly cognizant of the intimate, inseparable connection between human activity and life on this planet. … “The Sixth Extinction’ is both powerful and accessible, and is something everyone should read,” says Millicent Gaskell, University Librarian and Director of Falvey Memorial Library. (Quotations from https://www1.villanova.edu/villanova/media/pressreleases/2016/0705-1.html)

Want to explore the some other views of the sixth extinction? See the Dig Deeper below.